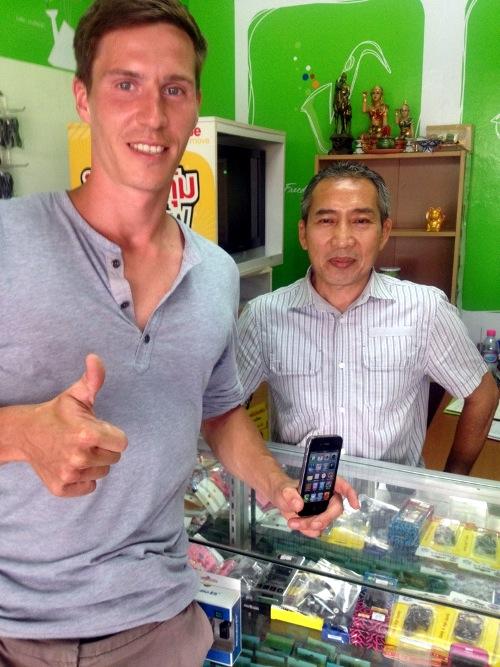 PHUKET: Police quickly nabbed a Phuket druggy by using the GPS tracking feature of the iPhone he had stolen from a German tourist yesterday.

The German tourist, David Trebs, was standing in front of the 99 Oldtown Boutique Guesthouse in Phuket Town at about 2am yesterday when a man on a motorbike drove by and snatched his iPhone, explained Lt Col Prawit Engchuan of Phuket City Police.

Acting quickly, the Phuket City police arrived at the scene and used the “Find my iPhone” function of another iPhone operating system that allowed them to track the GPS signal of the stolen iPhone.

“The GPS showed that the phone was around Wat Kosit near Phuket Technology College on Thepkrasattri Road,” Col Prawit explained.

Police and Mr Trebs went immediately to the area; on arrival, Mr Trebs spotted the thief.

The man, Montree Mulhead, 20, attempted to flee but was apprehended by the officers.

“We searched Mr Montree and found two plastic bags in the cuffs of his jeans – one was empty, the other contained .38 grams of ya ice,” Col Prawit said. “He confessed that he stole Mr Treb’s phone and sold it for two bags of ya ice (crystal methamphetamine),” Col Prawit said.

Mr Montree was charged for “using a motorbike to steal” and for the possession of a class 1 narcotic.

The telephone, which Mr Montree had sold to a friend in the Wat Kosit area, was subsequently tracked to a mobile phone shop, where Mr Trebs recovered it.