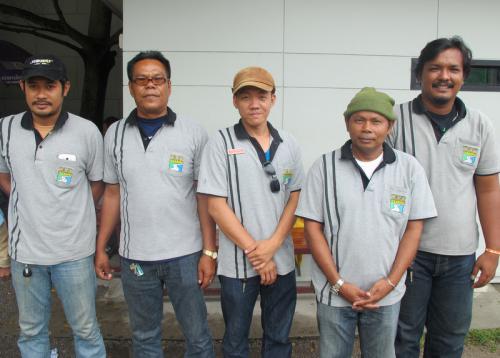 PHUKET: The restructuring of the Central Festival taxi rank into a co-operative, part of a campaign to rid Phuket of violent taxi groups, missed its deadline by over a month.

However, the process of becoming a legal co-operative should be completed this week.

“We’ve gotten certification from the Phuket Provincial Cooperative Office, now the documents just need to be approved by the Phuket Land Transport Office,” the leader of the taxi group, Pom Sukkasem, told the Phuket Gazette today.

The Andaman Phuket Taxi Service Co-operative has 115 legal drivers: 100 who are legal; five who have applied to be legal and whose registration is pending; and 10 members who have not yet submitted their applications, Mr Pom said.

“Once we’ve finished the process of becoming a legal co-operative, we will only have legal drivers working for us,” he said.

“I will ask officials for help in making the last 10 members legal,” he added, citing financial problems for causing the delay.

Members of the co-operative will all wear uniforms, and the taxi fares will be posted clearly for passengers to see, Mr Pom said.

In addition, members will be required to hold new elections for leaders within 90 days of becoming legal.

“I’m not sure whether I’ll be elected or not,” Mr Pom said.

Mr Pom won re-election once before, by a wide margin, after he and his brother were released on bail last year for violent extortion charges (story here). He has denied the charges.