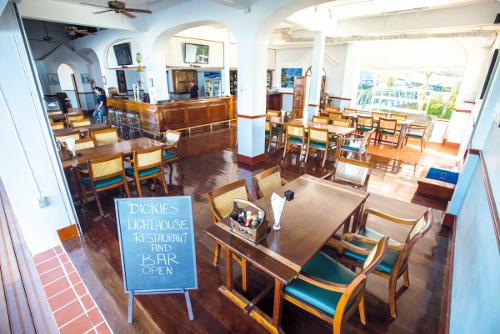 PHUKET: Located right on Chalong Bay near the Kan Eang pier, the Lighthouse restaurant and bar has earned near historical status among expats, tourists, and yachties alike. After being built in 1988 and managed by American Jimmy Pearson, Jimmy’s Lighthouse Bar and Grill enjoyed years of operation until recently when the doors shut and only a defunct restaurant and memories remained.

“When I first saw it, I thought – would there be a lower lighthouse anywhere in the world,” said new owner Dickie Bell. Bell and business partner Steven Edwards recently took on the project of revamping the bar and restaurant as well as adding a coffee shop.

Following a host of renovations, on December 7, after lying dormant for 10 months, the legendary establishment has reopened under new ownership.

Bell had been interested in part ownership of a friend’s bar and when that fell through, he started looking elsewhere. “I started looking around and came across this; it was out of commission at that stage”.

It turned out to be good timing, “It was put on the market only two days prior,” said Bell. Bell explained how year after year of heavy use had taken its toll and what it took to give the restaurant a new life. The wood floors have been stripped of paint and refinished, the rosewood bar has regained its warm luster and the furniture that hasn’t been replaced altogether has freshly burnished brass and new wicker threaded in.

The building also boasts five rooms for rent located on the second floor, all with commanding views of Chalong Bay and its turquoise waters and emerald islands.

The new menu will offer the best of both the Thai and Western culinary worlds. New items will be cycled through every couple of months but keep an eye out for the fresh catch of the day (you are a literal stone’s throw from the water after all) as well as t-bone steaks and a Sunday afternoon roast.

A full bar is available with many classic libations on hand and a special hard-to-find (at least in Phuket) treat – a singular traditional Irish Stout on tap. Surely one could find worse things to do with their time than watch the sky burst into blazing orange at sunset over the Andaman sea with a cold stout in hand.

Regardless of where the sun may be, there will always be the option of accompanying that stout with some Aussie Rules football or other sports that will be playing on one of the five big-screen TVs peppered throughout the restaurant.

Even though the Lighthouse was never actually a real functioning lighthouse, it is bound to continue on as a favorite place for sailors and yachties to kick back with some food and drink while watching their boats bob in the sea.

The lowdown on common EFT investments