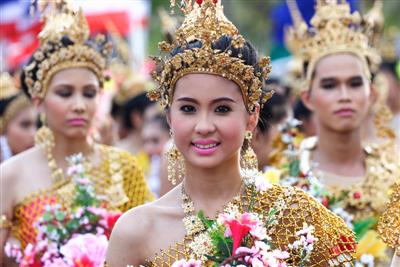 PHUKET CITY: ‘Phuket Carnival at Patong 2009’ kicked off in style yesterday with fireworks, a colorful parade and plenty of activities along the Patong beachfront.

The grand opening began at 5:30pm with a welcome speech by Phuket Governor Wichai Phraisa-ngop, followed by a parade from the football field all the way along the beach road south to the Holiday Inn.

Among the 56 government and private-sector organizations taking part in the colorful spectacle were: Patong Municipality, Dowroong School, Kathu Police, Patong Hospital, Simon Cabaret, Jungceylon, Central and several other communities in Patong and other parts of Kathu.

During the six-day festival, there will be a wide variety of live entertainment starting at 7pm at a beachfront stage near the end of Soi Bangla.

The event is co-hosted by the Phuket Provincial Office, Patong Municipality and the Phuket Tourist Association.

The beer sponsor is Chang, which has contributed 40 million baht to ensure everyone has a good time.

Despite being held back to avoid heavy rains that washed out carnivals early last month, last night’s fun got a slight damper by intermittent thundershowers that started at around 10pm.

Tonight’s forecast by the Meteorological Department calls for widely scattered thundershowers covering 30% of the island and northeasterly winds from 15kmh to 30kmh.