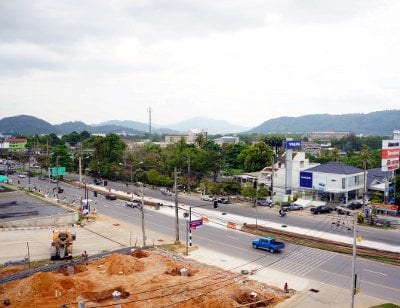 PHUKET: The Administrative Court in Nakhon Sri Thammarat has thrown out a complaint against work on the new turning in front of Phuket Bus Terminal 2, which the Land Transport Office now hopes to have in operation shortly after the upcoming Songkran holiday.

Phuket Land Transport Office [PLTO] chief Teerayut Prasertpol told the Phuket Gazette he received a telephone call from the court today informing him of the ruling, which clears the last hurdle to the opening of the terminal that was completed 27 months ago at a cost of 128 million baht.

“An official written summary is expected to arrive in Phuket next week,” he said.

“Today the Administrative Court in Nakhon Sri Thammarat advised me that it dismissed a complaint filed by Bussaya Lianudom, wife of former Rassada Mayor Suratin Lianudom, charging that creating a turning in front of Phuket Bus Terminal 2 would endanger her home and its residents, as well increase the likelihood of road accidents in the area,” he said.

“On February 28, she accused the Department of Highways and the head of its Phuket Office with working illegally on the project and requested that the Court order a temporary work stoppage until the Court ruled on the case,” he said.

However, the turning was largely a fait accompli by the time the Court received the complaint. Workers from subcontracting firm the Chaiyakorn Company appeared at the site around dawn on the morning of Saturday, February 25, and quickly got down to business on the 3-million-baht project.

A stretch of median strip, as well as shade trees that once covered it, were gone before the Court even had a chance to consider issuing a stoppage order.

Mr Bussaya’s complaint charged that some 400 buses a day would pull out of the terminal using the new turning, most between the hours of 5am and midnight.

The buses would spew pollution into the air near her home as they went through their lower gears, creating a great deal of noise pollution in the process, she wrote.

The turning would also increase danger to pedestrians trying to cross the road due to decreased visibility, while attracting scores of tuk-tuks, taxis and other service vehicles, she charged.

The complaint also charged that buses might endanger vehicles traveling southbound because the access road to the terminal is sloped, which might cause some buses to accidentally roll out onto the road. She also suggested the buses use an existing u-turn further to the south to head northbound.

The complaint also noted that neither the bus terminal project nor the turning project were ever subjected to public hearing processes, she wrote.

Her husband Mayor Surathin earlier told the Gazette he feared opening the station would quickly turn the area into a center of drug-dealing activity.

Crime reports over the years show that Phuket drug dealers have frequently used long-haul buses and the cargo shipment services as they offer as a way of smuggling ya bah (methamphetamine) and other contraband onto the island.

“We did not hold a public hearing because at the time we were not required to. The reason we built the bus terminal was for public benefit and convenience. It was not easy to find land for the project either. We have always put the public’s benefit first and foremost,” he said.

“The bottom line is that this complaint comes from the house of the former mayor, who is afraid the station will effect his view. It’s a personal issue. In fact his home is not directly opposite the station, but diagonal to it.

“The fact remains that the turning in front of the station is the best solution for the new terminal. If we hadn’t done it this way can you image the traffic that would be caused by having three or more buses all trying to negotiate a [standard] u-turn at the same time?” he asked.

Mr Teerayut also dismissed safety concerns raised by the former mayor’s wife, saying that traffic engineers had designed the u-turn in a way that would not cause increased traffic congestion.

The design passed all other safety requirements and buses should have no trouble waiting at the red light to pull out. They would not wait to do so on the ramp, he added.

After well over two years of delay, the Land Transport Department in Bangkok is understandably keen to see the station finally go into operation.

“Somchai Siriwattanachok, director-general of the Land Transport Department wants it to open before Songkran, but the bus schedules have already been made. I don’t think they could be rescheduled in time, so I think it might be best to wait until after the holiday,” he said.

The PLTO is currently seeking to hire four staff members to work at the new terminal. Once opened, it will service all inter-provincial buses, while on-island buses will continue operate from Phuket Bus Terminal 1 on Phang Nga Road.

The two stations are already connected by Route 2 of the ‘pink bus’ service run by the Phuket Provincial Administration Organization.

The new turning will not effect traffic flow at the nearby Tantalum Junction, the three-way intersection of Thepkrasattri and Prachasamakee road just to the south. The traffic lights there will continue to operate as they do at present, Mr Teerayut confirmed.