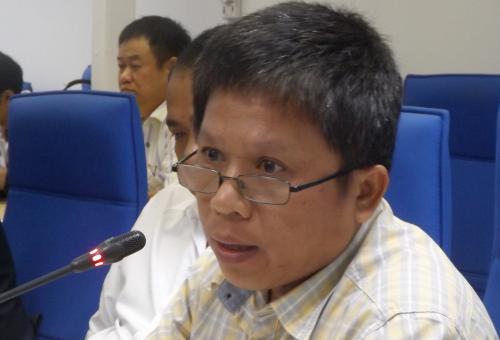 PHUKET: An open meeting at the Airports of Thailand (AoT) Phuket office yesterday morning has resulted in a slew of new measures to be introduced to improve the quality of service of taxis serving Phuket International Airport.

The news follows weeks of controversy over current arrangements.

“What has been agreed on is that each taxi operating to and from the airport must have an engine of at least 1,950cc,” announced Phuket Airport Deputy General Manager Visutr Chantana.

“These vehicles must be not more than five years old and must be insured for the car, the driver and passengers,” he added.

“All of the taxis will be monitored by GPS from our control room to ensure that no taxis go astray. This will ensure that passenger are not taken on circuitous routes, but are taken directly to their chosen destinations,” Mr Visutr said.

Kanputt Mungklasiri, an executive vice president at the airport, recommended that a single counter be dedicated for all taxis so that passengers could easily queue and be issued tickets for taxi service, much like the system used at Suvarnabhumi International Airport in Bangkok.

“The tickets would record the taxi number as well as the destination. Fares for various destinations should be shown at the counter,” Mr Kanputt told the Phuket Gazette.

“We should also have standard uniforms for drivers. This can solve a lot of the ‘gray-area’ problems we have experienced,” he said.

Chukiat Panyawai, a representative of a registered taxi co-operative that serves the airport, noted that any changes should keep the drivers in mind.

“If the AoT wants to terminate the existing taxi group system, they should establish a new system that will benefit us because we have served passengers at the airport for a long time,” he said.

Phuket Vice Governor Chamroen Tipayapongtada, who chaired the meeting, called for AoT to form an independent committee to resolve all the airport’s taxi-related problems.

“Such a committee would define an exact and detailed plan to replace the current taxi-group arrangement, which will come to an end after November,” V/Gov Chamroen said.

“Above all, we would like all parties to help to improve Phuket’s image when it comes to taxis,” he added.