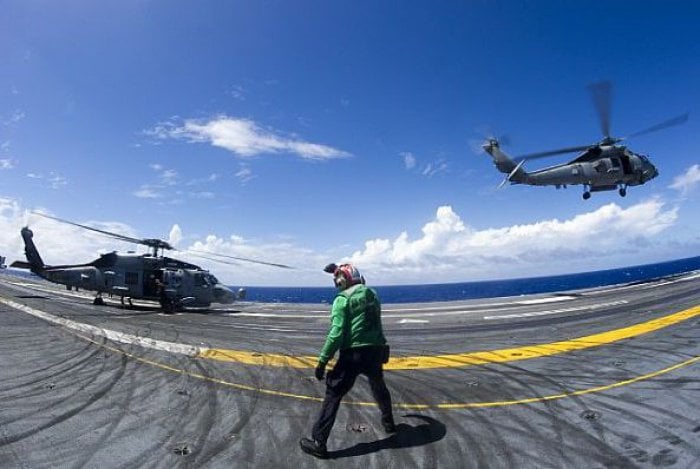 PHUKET: Thailand may allow the United States to use either Phuket Airport or U-Tapao in Rayong as a base for planes assigned to monitor the movement of migrants stranded in surrounding seas.

Thailand is setting up the Operations Centre for Patrol and Humanitarian Assistance to Irregular Migrants in the Indian Ocean (OCPHAM) to liaise with the international community in extending help to any refugees set adrift, he said.

Gen Worapong’s comments suggested a change in course from the statement given by Prime Minister Gen Prayut Chan-o-cha one day earlier (story here).

“We agreed to a request by the US [United States] to help by having its planes patrol areas. Any country could do the same as the US, but they have to be under our supervision because it is our area. They will not independently patrol – they have to work with our task force,” Prime Minister Gen Prayut Chan-o-cha said on Monday.

Foreign Minister Tanasak Patimapagorn said the Thai side had asked the US to provide more details on its proposed mission.

“I wish to emphasize that Thailand has not yet rejected the request. It’s a good request, but we have to take national security into consideration,” Minister Tanasak said.

The US has been asked to dispatch its warships to support a floating naval base that will be set up to help migrants found at sea [Video Report here].

“We accept assistance from international organizations in the form of necessities at our request, not cash, as that could possibly lead to problems,” Minister Tanasak said.

The cabinet on Tuesday approved the military’s operations off the Andaman Coast to help Rohingya and other migrants at sea on humanitarian grounds, a deputy government spokesman said.

OCPHAM will involve land patrols by the Army in border areas, maritime patrols by the Navy and mid-sea relief and medical operations, plus patrols by the Air Force over Thai waters in the Andaman Sea, Maj-General Weerachon Sukhonpatiphak said. All international relief agencies taking part in all assistance programmes would be granted permission to carry out activities in Thai waters and on Thai soil, he said.

More than 600 officers have been assigned to staff the floating patrol base, including doctors and nurses. Video: PGTV

The Third Naval Area Command, which is responsible for the Andaman Sea, issued a statement detailing its operations, which would involve 600 personnel, seven patrol and landing vessels, two planes and two helicopters, Vice Admiral Sayant Prasongsamrej told the press at his command headquarters in Phuket.

Gen Worapong said OCPHAM started yesterday and would run for two weeks or until further notice.

The HTMS Ang Thong, a large amphibious landing ship capable of holding many people, is joining the fleet. One doctor and two nurses would be on all seven ships. Serious patients will be sent to inland hospitals by helicopter, Gen Worapong said.

General Sujin Iam-pee, a senior official at the Internal Security Operations Command (ISOC), said all migrants would be escorted by military personnel and police if dispatched from mid-sea platforms to inland shelters. They would be processed by local immigration offices and repatriated.

Thailand is now holding 779 new migrants since the exposure of the human trafficking tragedy earlier this month and paying for their meals, Gen Sujin noted.

In Ranong, Satun and Songkhla, 6,846 residents are participating in a scouts scheme started by police to watch for migrants or illegal entrants, a source said.