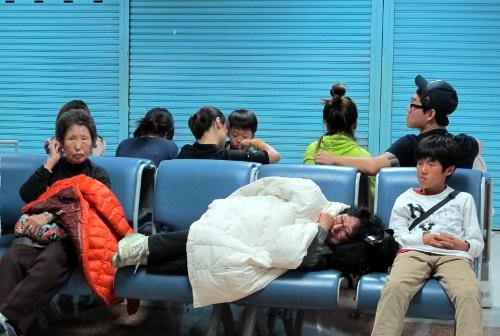 PHUKET: More than 1,000 passengers were stranded at Phuket International Airport last night after an emergency landing by an Air Berlin flight forced authorities to cancel all inbound and outbound flights.

Air Berlin flight AB-7425 from Phuket to Abu Dhabi, in the United Arab Emirates, took off from Phuket at its scheduled time of 9:26pm, but was forced to make an emergency landing about 40 minutes later due to a reported engine fire.

The plane made a safe landing and no injuries were reported, but the aircraft burst several tyres during the emergency procedure.

With the aircraft still on the runway, officials diverted all flights from the airport, leaving a total of 1,016 passengers stranded overnight, said an airport press release.

Many were forced to seek accommodation on the island, while hundreds slept at the airport.

Phuket Airport reopened at 3:35am after the Air Berlin Airbus 330-200 was removed from the runway, said Airport Director Prathuang Sornkham.

“Several of the aircraft’s tyres burst during the emergency landing. It took seven hours to replace the tyres before we could move the plane to safety,” explained Airport Director Prathuang.

“We are now waiting for mechanics to arrive to inspect the engine and determine what the fault was,” he added.

Phuket Governor Maitri Inthusut arrived at the airport last night to speak with passengers stranded at the terminal.

“The passengers seem to understand that this was an unforeseeable event and that we are we doing the best we can,” he said.

Air Berlin today issued a statement over the incident.

“Air Berlin confirms that an incident took place today on flight AB7425 from Phuket to Abu Dhabi. The Airbus A330 was able to land safely in Phuket; all 249 passengers are safe and were able to disembark normally via the steps.

“No precise details are known at present regarding the incident. It cannot be confirmed that the engine caught fire.

“Air Berlin is already in dialogue with the local authorities and is assisting them in their investigation of the incident. For the time being, Air Berlin’s main priority is to take care of its passengers on the ground in Phuket,” the statement said.