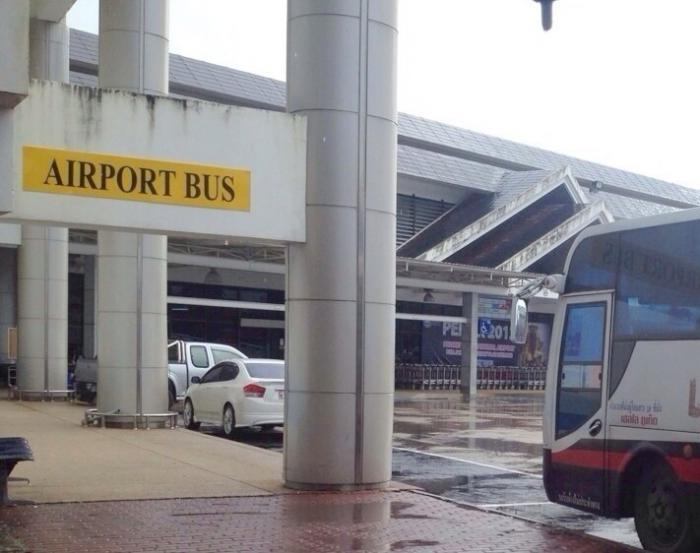 PHUKET: The Airport Express Bus lost 800,000 baht in its first seven months of service due to taxi drivers poaching customers and lack of support from the Airports of Thailand (AoT), the owner of the transport business told the Phuket Gazette yesterday.

The much-heralded inaugural run of the service, which offers rides between the airport and Patong for 120 baht, was on July 19 last year.

By early October, a lack of customers led the owner, Prakob Panyawai, to report a loss of 400,000 baht for the same reasons he stated yesterday (story here).

“We have two problems: underhanded tactics of other transport operators, and lack of support from the AoT,” he said.

Taxi and van drivers, as well as their agents, sometimes board the buses to try to steal passengers, Mr Prakob said.

“In December, the windshield of one of our buses was broken during the night. I filed a complaint with the Tah Chat Chai police. They say they checked CCTV, but couldn’t find a suspect,” Mr Prakob said.

“Additionally, the number of illegal taxi drivers at the airport at night caused me to worry about the safety of my staff, so I cancelled our last bus trip of the day, the one at 8:45pm.”

Mr Prakob also complained about poor signage and the fact that he has not been allowed to open a counter inside the airport terminal.

“Arriving passengers don’t know about our service. There are signs in the airport, but the AoT won’t let our staff walk inside to advertise the bus or even discuss having a counter until the new terminal is open next year.”

“On top of that, the sign we have outside is ugly, but it’s hard to change. I have to do a lot of paperwork with the AoT in order to get permission to change it.”

However, Mr Prakob hasn’t thrown in the towel yet.

“I want to advertise in the baggage claim area and get my staff to walk throughout Patong handing out information about our service,” he said.

Additionally, Mr Prakob has started using vans when the number of passengers falls below six, and is applying for permission to use minibuses.

“Minibuses will save 50 per cent on fuel costs. I’ve put in a request with the Phuket Land Transport Office to be able to put our name on the minibuses too. Once we do that, we can pick up passengers along the route,” Mr Prakob said.

“We want to be the transportation of choice for passengers who want to save money on their trip to and from the airport.”