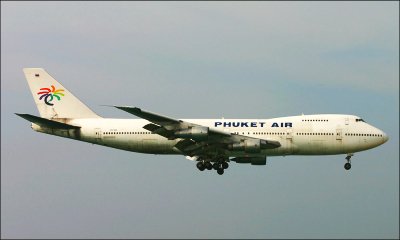 The website of the UK Department for Transport (DFT) says that “the Secretary of State has suspended the permit of Phuket Airlines (Thailand) because of operational safety concerns.” The statement was last modified on April 28.

The airline joins others on the UK blacklist, including airlines from Equatorial Guinea, Liberia, Tajikistan, Sierra Leone, Congo, Mauritania and Swaziland.

The Guardian News Service quoted the DFT as saying the sanction, which is unusual for a mainstream carrier, was a result of “the number and severity of safety breaches revealed in Civil Aviation Authority inspections”.

One of the airline’s aging Boeing 747 jets is still at Gatwick Airport, impounded by the airport’s operator, BAA, for non-payment of landing fees.

The Guardian News Service said that BAA confirmed it was refusing to allow a Phuket Air plane to leave Gatwick until the carrier had paid its bills, although it declined to say how much money was at issue. The news service, however, quoted “industry sources” as saying the amount owed was more than £100,000 (7 million baht).

The airline’s website makes no mention of either ban, and both London and Amsterdam are still listed on its international flight schedule.

Sribenja Semmeesook, Communication Consultant of Aziam Burson-Marsteller, the public relations agency for Phuket Air, told the Gazette today, “In fact, since the tsunami there have been fewer people traveling from the UK to Phuket, so Phuket Air suspended flights to and from Gatwick in the middle of April.

“As for the Amsterdam route, Phuket Air staff are now talking with the Netherlands authorities, and we expect a positive result soon.”

Asked about the seizure of the 747 at Gatwick, she said, “[Landing fees are] a financial matter so I am unable to comment on that. However, I do know that the jumbo jet was parked at Gatwick at the end of April because of mechanical problems. As soon as all the repairs have been done the plane will be brought back to Thailand.”

Glut of housing for tsunami survivors

In love with stickers