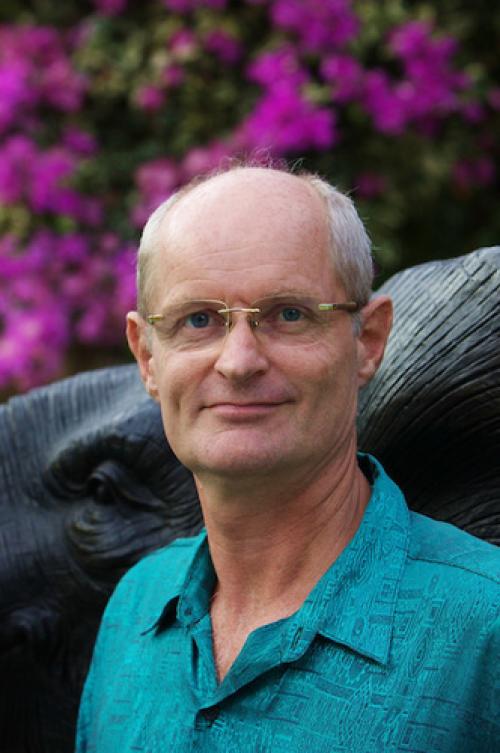 PHUKET: A professional travel photographer and boutique resort owner in Phuket is offering a 100,000-baht reward for any information leading to the return of his MacBook Pro and backup hard drive – which contain his life’s work.

Brian Skyum, owner of Coco Palace Resort in Rawai, returned to Phuket after five weeks in the Philippines to find his maid was the only staffer still working for him and electronic items worth reportedly more than 500,000 baht were stolen from his room.

Among the items reported missing were an Apple MacBook Pro, two Canon cameras, a tripod, a Panasonic home theater, a 2-terabyte hard disk, a Canon L series lens, a Sony DVD camcorder and a Samsung TV.

On the MacBook Pro and hard drive were 36 years of Mr Skyum’s processed photography from over 170 countries – now all gone.

“I could survive without the half-million baht of monetary value; the photos are all that matter,” Mr Skyum told the Phuket Gazette.

The widely published Danish photographer is the self-proclaimed “widest-travelled person in the world” and, up to this month, he had the photos to prove it.

“My photography is pretty much National Geographic style documentary. I presented public slideshows for 16 years, so I covered everything in each country,” he said. “It’s not just marking countries off a list.”

If Mr Skyum is unable to regain his life’s work, he plans to sell what equipment he has left.

“It’s difficult to stop something that you’ve done since you were 20 years old. I’ve committed my life to this. I have no family, no children and no wife. I am married to my job and the planet Earth.”

Though two-thirds of Mr Skyum’s photographs are backed-up in his homeland, they are saved only in “raw format”, meaning years of editing and fine tuning each photo is lost – with one-third of his photos completely gone.

“I’m not going to redo all of this again, this is the end of it because I lost so much of my work and tens of thousands of photos are gone completely, both jpegs and raws,” he explained.

Due to being about two years behind processing his photos, there are no other records of his photos taken during trips to various countries over the past two years.

Following Mr Skyum filing a complaint with the Chalong Police, Sub Lt Kraisorn Boonprasop is now investigating two main suspects: a Burmese handyman who was staying in Mr Skyum’s room while he was out of the country; and the Coco Palace Resort manager, who quit four days before Mr Skyum returned from his trip.

“Mr Skyum allowed ‘Mr Dam’ and his family to stay in the room while he was travelling. He gave him the key,” Lt Kraisorn told the Gazette.

“We didn’t find any traces of the place being ransacked and the thick dust in the room made it impossible to find fingerprints,” he added.

When Mr Skyum returned from his trip, his maid, the only staffer still working for him, told him that she had found the key to his room still in the door several days after Mr Dam had returned it to the resort manager and left.

The items missing from the room – in addition to the electronics – were only a couple small things from the minibar, Mr Skyum explained. However, the reception computer and all of the paperwork for the bookings, including calenders, were also missing.

Mr Skyum explained to the Gazette that he contacted the manger, who admitted to taking it home to remove some personal information.

The computer was returned the next day, but had been wiped clean, Mr Skyum alleged.

“I introduced her [the manger] to the [photography] business, my website and database in New York… I offered her 30 per cent commission, which is quite high. She didn’t sell anything, but at least she knows now the value of my collection,” Mr Skyum said.

The Coco Palace Resort, which has been on the market for eight years, was originally built for about 25 million baht, all of which Mr Skyum said was derived from his photography business.

Police are continuing their investigation into the missing items.

Any person who believes they have seen Mr Skyum’s stolen equipment (MacBook Pro with Danish keyboard) are urged to call Lt Kraisorn at Chalong Police Station at 076-381247 or contact Mr Skyum at 080-8831040.