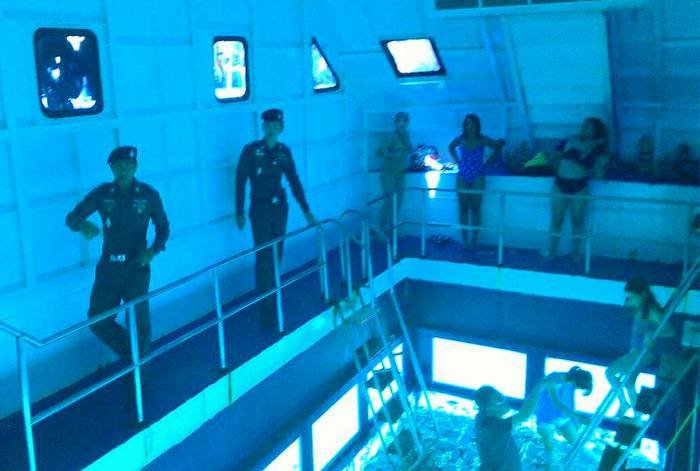 PHUKET: An “aquarium in the wild” boat owner was fined 10,000 baht for improper use of his boat after a Facebook post criticized the operation of breaking the law.

The large fish hold of Lok Tai Taley (World Under the Water) had been converted to allow fish to swim freely into it and guests to walk among them, Maj Anurak Parinyasathiragul of the Krabi Marine Police told the Phuket Gazette.

“Counter to some of the allegations made against Nikom Ocha, the boat owner, the license for the boat had not expired; it was not a ‘glass bottom boat’; all the documents were in order and when we were there, there was no evidence of tourists catching or feeding the fish,” Maj Anurak said.

“However, the boat was being used improperly, as it had been permanently anchored in Tonsai Bay, Phi Phi, so tourists could come look at the fish, yet it was licensed only as a ferrying vessel.”

“This is all the Marine Office can do,” Maj Anurak said. “However, officers from the Phi Phi National Park will come and check if the company, Phi Phi Cruiser, is breaking any national park regulations.”

The boat has not been seized or removed, Maj Anurak confirmed.

“But we will keep monitoring the boat operators. If they keep taking tourists on the boat to see fish without a proper permit, we will keep on fining them,” he said.