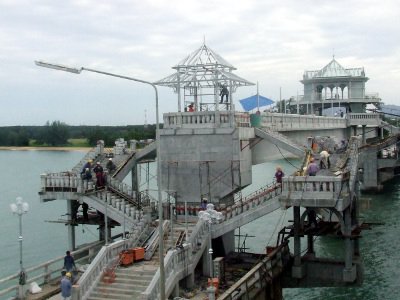 “People are walking onto the bridge – and we’re not stopping them,” said Phuket Provincial Highways Office Chief Arun Sanae.

“They think that the bridge is now open because we have finished construction but what we are doing now is cleaning up and adding the final touches,” he said.

Built under the 378-million-baht budget covering the construction of the now-open Srisoonthorn Bridge northbound off the island, the 44-year-old Sarasin Bridge underwent structural reinforcement and was raised to give 10 meters’ clearance for boats passing underneath.

The original bridge, completed in 1967, was named after Pote Sarasin, who served as the head of the now-defunct National Development Ministry.

Project engineer Dr Phattanapong Thonsuk of project contractor Italian-Thai Development Co told the Phuket Gazette previously that the Sarasin Bridge had suffered from years of saltwater corrosion and wear and was replaced following concerns by the Highway Department about its structural integrity.

Mr Arun explained that Italian-Thai Development Co will hand over responsibility for the bridge after a final inspection today.

For the time being, vendors are not allowed to sell food or other goods on the bridge, he said.

“If the bridge attracts many visitors, we may request for toilets to be installed and more car parking spaces made available in the vicinity to make visiting the bridge more convenient,” Mr Arun said.

The official opening ceremony for the Sarasin Bridge and the Srisoonthorn Bridge will be held around end of this year, he added.

Phuket Prison to crack down on phone and drug deliveries