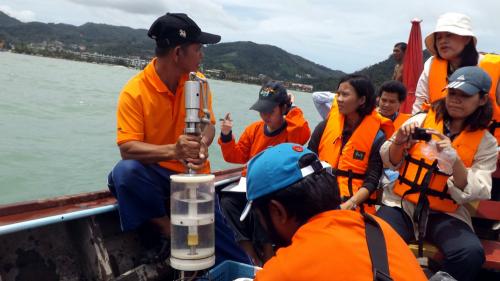 Test results were released for two sites in the tourist-dense midsection of the beach, away from the mouths of the two canals that discharge water into the bay.

The testing of Patong Bay water came in the wake of an algae bloom last month and allegations of raw sewage potentially causing a health hazard to beachgoers (story here).

“The tests show that the water on August 23 [four days after the bloom was first reported] would not harm a person swimming in it and would not be dangerous to marine animals,” said Daroonwan Schwartz, a PMBC oceanographer.

“However, wastewater released untreated into Patong Bay will have long-term affects on marine resources and water quality if no measures are put in place to control this,” Ms Daroonwan said.

PMBC yesterday released the full results for test point B2 and B3 conducted on August 23, with particular emphasis on levels of bacteria, nutrients and oxygen.

Bacteria levels should not exceed 1,000 MPN (most probable number) per 100 milliliters, according to the PMBC report. At the first station tested, the level was 980 MPN; and at the second, it was 900 MPN.

“The results show that the bacteria level is very high, but does not exceed the safety standards,” said the Director of the PMBC Ukkit Satapoomin.

Nutrients (ammonia, phosphorous and nitrate), often signs of raw sewage being released, should not be more than .36 moles per liter, which was a hurdle easily cleared by the water taken from locations away from water discharge. The test results showed nutrient levels at only .0025 moles per liter.

Other measurements taken that day, for salinity, pH, temperature and clarity, all fell within acceptable levels, Ms Daroonwan said, noting that the results are relevant only for the day in question.

“We tested sites B1 and B4 later in the month, and the results have yet to be analyzed,” said Ms Daroonwan.

Ms Daroonwan also commented on the frequency of water tests in Patong, which are scheduled to be done every two months.

“In other countries, they are done every day,” she said. “But we don’t have enough staff to do that. We only have 10 people responsible for conducting tests in Phuket, Phang Nga and Krabi.”

Ms Daroonwan said the PMBC had contacted Patong Municipality to set measures for managing wastewater treatment in the community.

This water test and future ones will be sent to relevant government organizations, including the Phuket Governor, Phuket Provincial Office of Natural Resources and Environment and Patong municipality she said.

* The original story cited the official report, which claimed that Bang Yai canal was in part to blame for the water quality of Patong Bay. This, however, was a mistake within the report.