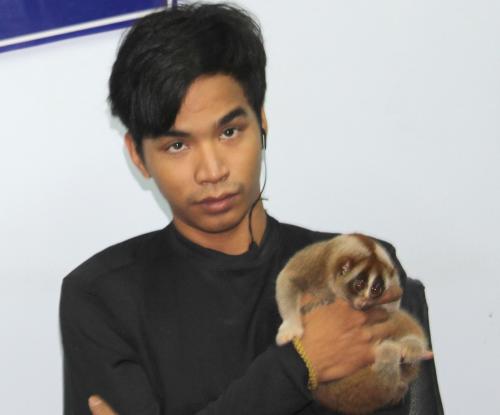 PHUKET: The changing faces of touts in Phuket exploiting the slow loris – a vulnerable and protected species – is a sign that the penalty for the crime is stiff enough, said Patong Police Deputy Superintendent Pratuang Polmana.

Police action and determination to re-apply pressure to the issue of animal touts in Phuket follows global celebrity Rihanna posting photos on Instagram of herself posing with a loris in Patong’s Soi Bangla (story here).

“I think the penalty is strong enough because the touts’ faces keep changing – it is not always the same person being arrested, which means many of them are too scared to do it again,” Lt Col Pratuang said.

Though the slow loris is considered by many tourists a common sight on Soi Bangla, the touts caught with them claimed to have travelled to Bangkok to make their purchase.

“Most of those we have arrested for being in possession of a slow loris said they bought them at the Chatuchak Market in Bangkok,” Col Pratuang said.

The day after Rihanna posted the photo of herself with a slow loris, a multi-agency raid swept Patong, catching two touts with the creatures, explained Kathu District Chief Veera Kerdsirimongkol.

Passakorn Janpakdee, 20, from Nakhon Sri Thammarat, and a 16-year-old youth from Bangkok were charged for the possession of a protected species without a permit.

“The charge carries a penalty of up to 40,000 baht or up to four years imprisonment, or both,” Col Pratuang said.

“We will continue this crackdown on loris touts until this disgraceful business is totally eliminated from Phuket,” Tawatchai Srimai of the Patong Police said after the arrest.

To do this, however, stronger suppression measures are necessary, said Col Pratuang.

“We have to conduct daily raids,” he said. “Once they learn that we are taking serious action, they will stop it – eventually. And this is what our officers doing right now.”

Patong water-quality test results in – some of them