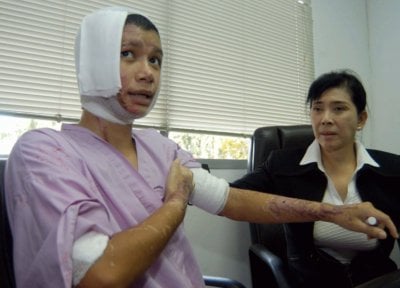 PATONG (Kom Chad Luek): A 23-year-old waitress has been badly disfigured after acid was thrown on her, allegedly by her jealous ex-boyfriend. The woman then traveled to Bangkok with her mother to seek help from the Paweena Hongsakul Foundation for abused women and children.

Tassaya Wanich, 24, met K. Paweena on May 26 and explained that she had been frequently abused by 23-year-old Booin-wiwat Iat-talod, an employee of HomePro in Phuket, with whom she had lived for four years and has a three-year-old daughter.

K. Tassaya, an employee of the Seagull Home Hotel in Patong, told K. Paweena that the abuse started three years ago when she was nearly strangled to death with the electrical cord of an iron and forced to beg for her life.

She left Booin-wiwat to live with her aunt after he followed her to work in a jealous rage and sliced her ear with a knife, she said.

“On April 6 he came to try and make up, but I refused and asked to end the relationship. When I turned to walk away, he splashed acid on my head, face and body. My aunt then rushed me to Vachira Phuket Hospital,” she said.

K. Tassaya said she filed a complaint with the Kathu Police, who issued an arrest warrant but have been unable to find Booin-wiwat.

K. Tassaya is asking the Paweena Hongsakul Foundation for assistance in the effort to have her ex-boyfriend arrested and also for help with her medical problems.