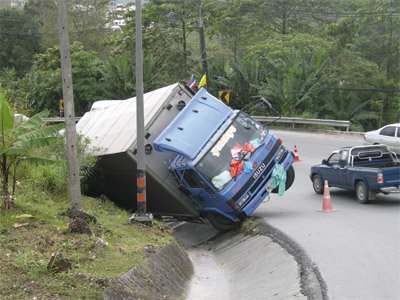 PATONG: The concept of building a tunnel between Kathu and Patong has been refloated and is being researched with an 80-million-baht feasibility study. Building the tunnel alone is already being estimated to cost as much as up to a billion baht.

Phuket Governor Niran Kalayanamit told the Gazette that the Phuket Provincial Office held a meeting with the Highways Department on October 11 to discuss how to improve traffic flow between Kathu and Patong.

Gov Niran said that a provincial committee has already been set up to look into traffic problems on the island. The committee has been told to maintain special focus on Patong with the aim of providing the resort town with some form of “short cut” connecting it with Phuket City.

“We plan to do something that is actually possible, will not take too long to implement and will not affect the environment negatively,” said Gov Niran.

“It will cost about 80 million baht for the feasibility study, which will provide us with the information to help determine what needs to be done,” he added.

“I recently discussed with Patong Mayor Pian Keesin how this project will have both people for and against it. The budget should be supported by the central government because it is responsible for providing basic infrastructures such as water, electricity and telephone lines.

“Like the other mega projects in Phuket, it will help to reduce the number of accidents especially on Patong Hill, which happen often,” Gov Niran said.

“We might be able to help gather the budget by drawing money from Kathu Municipality, Patong Municipality, the Highways Office and the OrBorJor [Phuket Provincial Administration Organization] because it will benefit all of Phuket,” he explained.

“If the central government has no money, we might need investors from the public sector,” the governor added.

Pol Col Grissak Songmoonnak, Superintendent of Kathu Police Station, told the Gazette, “This project should have happened a long time ago because it might not have cost as much when the land on either side was not private property.

“I also think this project might not happen anytime soon, but it has to happen eventually because in the future the area will become even more developed – and then the traffic situation will have to be improved, too,” he added.

Allegations of vote-buying under investigation