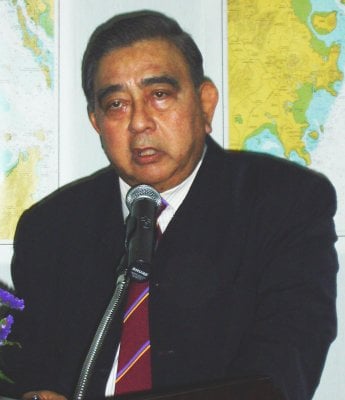 PHUKET CITY: Dr Smith Thammasaroj, the chief of the investigation into the government’s handling of the December 26 tsunami disaster, has announced that three tsunami warning towers will be operational in Patong by the end of this month.

Speaking at The Metropole hotel after a meeting with Tourism Authority of Thailand (TAT) Deputy Chairman, Juthaporn Rerngronasa, TAT Region 4 Chief Suwalai Pinpradab and Phuket Tourist Association President Pattanapong Aikwanich, Dr Smith said, “We must know when tsunamis are going to strike and be able to warn tourists. We must have safe areas where people can run to.

“An earthquake measuring more than 7.5 on the Richter scale is likely to cause a tsunami, and everyone must be prepared before it strikes.”

The towers will be more than 15 meters tall, made of steel-reinforced concrete, solar-powered, placed two kilometers apart and each one will be audible up to a kilometer away.

The three towers in Patong will be part of a natural disaster warning system to be set up in risk areas around the country and coordinated through the National Disaster Warning Center (NDWC) in Bangkok.

“Some 45 warning towers will be set up in the six tsunami-affected provinces within six to 12 months,” said Dr Smith.

“We must have a good system of communication and be able to evacuate people away from coastal areas,” he added.

The NDWC will receive information from a national tsunami warning system, as well as from various government departments and scientific organizations abroad, and will be responsible for deciding whether to issue a public warning or not, Dr Smith explained.

“We must have instruments anchored in deep waters to measure waves and help us predict whether a tsunami is coming,” he added.

Installing such monitoring equipment would cost 54 million baht, Dr Smith said, adding, “However, such instruments would be reliable for only one year or so, and then there’s the possibility that someone might steal the equipment, because we can’t watch it all the time.”

If the NWDC issues a disaster warning, Dr Smith explained, it will have at its disposal some 10 television channels, 211 AM and 312 FM radio stations, short-wave radio, more than 1,000 village public address systems and the ability to send SMS messages to 20 million people by mobile phone in ensuring that the warning is distributed as widely as possible.