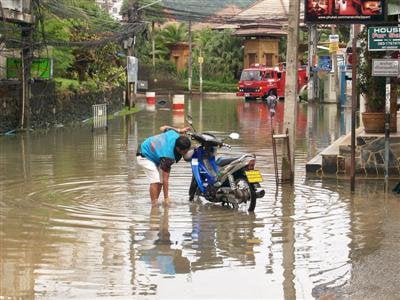 PHUKET: Public works intended to prevent floods in Patong this monsoon season have not been completed in time to stop deluges on Nanai Road and other parts of the town.

In March, Patong Mayor Pian Keesin pledged to put an end to the ‘Nanai River’, a 50-meter stretch of Nanai Road that spent much of last year’s wet season under three feet of water.

The length of road suffering from recurrent flooding varies, but generally stretches from the Aroonpat Village housing estate to the Chang Residence Hotel.

Work to lay drainpipes to siphon water from the road was expected to be complete by the start of this year’s monsoon rains.

But despite those rains not arriving until the end of May, the work goes on.

The project is contracted to finish by October 30, but Mayor Pian told the Gazette that it would wrap up ahead of schedule.

“It’s quite late now as the rains have started and a lot of vehicles use the road, but it should be done within two months,” he said.

Mayor Pian said that after this month there would be no more heavy flooding on Phang Muang Sai Kor Road after a project to lay drainpipes along its flanks is completed.

“There will only be small floods when heavy rains come at the same time as high tide,” he said.

The project appears to have improved drainage at the top end of Soi Sansabai, where it intersects with Phang Muang Sai Kor Road.

Although Soi Sansabai is privately owned, it a major access way to Soi Bangla for nightlife workers living along Nanai Road. Last year’s flooding there was a common source of complaint to the municipality.

Phuket murder suspect arrested after 3 years on the run