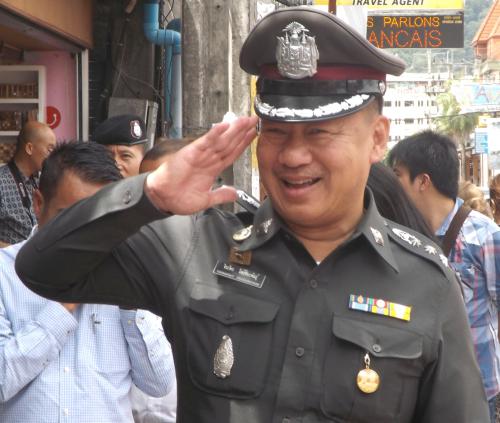 PHUKET: The chief of police in Phuket’s premier tourism town of Patong has been ordered to clear beach road parking spaces for tourists by December 31 – or face being transferred.

“Lt Gen Panya ordered the superintendents of the Patong and the Karon Police to get rid of mafia taxi operations in their respective precincts,” Col Arun told the Phuket Gazette.

“He also ordered that the problem of tuk-tuks parking along the Patong beach road be resolved – so that parking spaces would be available for tourists by December 31.

The man under the gun, Patong Police Superintendent Chiraphat Pochanaphan, remains confident that the beachfront parking problem will be resolved by New Year’s Eve.

“We have held talks with taxi operators, tuk-tuk drivers, Patong Municipality and other relevant departments. Everybody wants the road to look beautiful without parked cars causing traffic jams,” he told the Gazette.

“Patong Police are now working together with Patong Municipality to create taxi ranks, and tuk-tuk drivers have agreed to park only 10 vehicles in zones marked by white-and-yellow stripes,” Col Chiraphat said.

“Also, car rental operators have agreed not to park all of their cars along the roadside,” he added.

In case the promises by local tuk-tuk, taxi and car rental cartels are not honored, the concept of introducing parking meters was tabled.

“With parking meters, the longer they stay, the more they pay,” he said.

“At that time of day, there are very few road users other than tourists coming out for the nightlife, and nearly all tourists take taxis to their destinations,” he said.