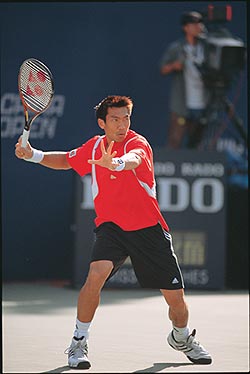 PHUKET: Thai tennis superstar Paradorn Srichapan is due on Phuket later this month.

Paradon, currently ranked 21 in the world, will be bringing the 2004 Paradorn Super Tour to the island’s Laguna Beach Resort on November 27 and 28.

The tour, which features exhibition matches, tennis clinics and autograph signing sessions, starts in Bangkok on November 22 and moves to Nakhon Ratchassima before coming to Phuket.

Joining Paradorn on centre court for the first of the two-day tournament’s four matches will be Nicolas Kiefer of Germany, who is currently ranked 15 in the world.

Following the men’s singles, there will be mixed doubles, pitting Paradon and Thailand’s number one female player Tamarine Tanasugarn against Kiefer and a female player yet to be announced.

On Sunday, there will be a women’s singles match at 4 pm , followed by men’s doubles, in which K. Paradorn and his older brother Naratorn will take on two foreign players. Some of the matches will be broadcast live on Channel 3.

Tickets, which provide entry to both days’ play and are priced at 3,000 baht, 1,000 baht and 500 baht, go on sale on November 12 at Canal Village-Laguna Shopping Centre. The 3,000-baht tickets include entry to a post-match “Meet the Players” cocktail party on November 28.