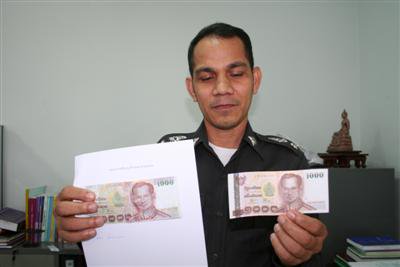 The pair were arrested at about 11 pm in the Fah Sai Restaurant in tambon Srisoonthorn Village 5 following an investigation by uniformed and plain-clothed officers.

Local merchants reported that people had been using fake 1,000 baht banknotes to make small purchases, then walking away with large amounts of real cash as change.

A formal complaint was filed at 9:30 pm on Wednesday by the owner of the Khrua Phan Laan Restaurant located at Srisoonthorn Village 1, where a man matching Nikorn’s description paid for a meal with one of the bogus bills earlier that day.

Police later found Nikorn enjoying a meal at the Fah Sai Restaurant with Mr Pattipong. The pair were arrested after they tried to pay the bill with another phony banknote. Mr Pattipong was also found in possession of another counterfeit 1,000 baht note.

All three notes collected as evidence in the case had the exact same serial number: 4 Jor 123395

Nikorn and Pattipong will be enjoying more free meals in upcoming days, courtesy of the Thalang Police. The pair will remain in custody at the station for next 12 days before their case is forwarded to the Phuket Provincial Prosecutor’s office.

Thailand has stiff anti-counterfeiting laws, with a minimum ten year prison sentence for those convicted of producing counterfeit currency.

Those found to knowingly pass counterfeit notes face sentences ranging from one to fifteen years and a fine of 2,000 to 20,000 baht.

Maj Anukul said merchants can spot fake banknotes by comparing them with real ones and looking for differences in size, color, paper quality and the image of the king.

Other telltale signs include identical serial numbers on different notes, a poor quality watermark and a lack of a reflective silver band, he said.