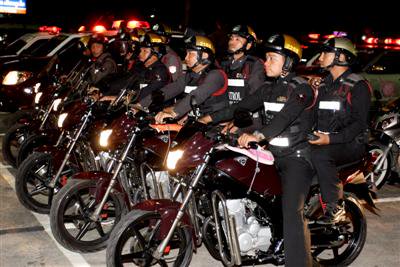 PHUKET CITY: Phuket City Police have deployed 180 police officers to man six checkpoints around the city as part of a crime crackdown that began on December 17 and will end at 6 am on the morning of December 20.

Phuket City Police Superintendent Wanchai Ekpornpit told the Gazette police have already opened 10 new cases as a result of the initiative, with charges including possession of drugs and firearms, counterfeiting and usury.

“We are checking everyone, but we’re treating tourists well,” he said.

Three main checkpoints are established on each day of the operation between 8 pm and 11 pm. Officers either keep these checkpoints open or set up smaller ones in three other areas between midnight and 6 am the next morning.

The three large checkpoints are on Wichit-Songkhraam Rd, in front of Surakul Stadium; on Thepkrasattri Rd, in front of the Muang Mai Volvo dealership; and at the Yaowarat Rd-Samkong Rd three-way intersection.

Col Wanchai declined to disclose the exact locations of the smaller checkpoints, though some have already been established at Slaughterhouse Junction, near the start of Chao Fa East Rd; on Soi Sakdidet 1 and another in Koh Kaew.