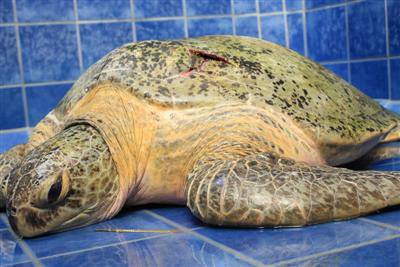 CAPE PANWA, PHUKET: Veterinarians at the Phuket Marine Biological Center (PMBC) are treating an enormous green sea turtle whose carapace was cracked open by fishermen operating illegally in the waters off Rawai Beach.

PMBC biologist Kanjana Adulyankosol, who heads the PMBC’s endangered species unit, said a team of officers from the Marine and Coastal Resources Department Region 5 office in Phuket found the turtle tied to an anchor and trapped underwater a few kilometers offshore.

The patrol team had sped out to the area to intercept the fishermen, who were probably in the area under the cover of darkness to fill orders for aquarium fish that are protected from fishing under Thai law, Miss Kanjana said.

As the patrol boat was arriving, the fisherman must have used rope to tie the turtle tightly to the anchor line by one if its flippers and then tossed it overboard before making their escape, she said.

The turtle, a male weighing about 120 kilograms and with a carapace 97 centimeters long, was the largest of its kind seen in Phuket waters in at least 10 years.

Its age was probably between 50 and 60 years, she said.

Although the fishermen managed to escape, officials have already filed a complaint against them and provided police with good evidence – including photos of all the suspects – that should lead to their arrest.

As for the green turtle (Chelonia mydas), it was taken to the PMBC, where it is now being treated with antibiotics for a wound 11 centimeters long, six centimeters across and 1.5 centimeter deep, she said.

“We have already dressed the wound. The turtle is not in a stable condition and has not been active today, but if there is no infection he will probably be alright. After a few days or maybe a week we will be able to say more about his chances of survival,” she said.