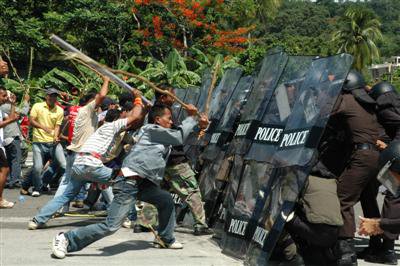 PHUKET CITY: Prime Minister Abhisit Vejjajiva said yesterday the Asean-led summits in Phuket next month will not see a repeat of the Pattaya fiasco as his government had a good new security plan in place.

The government was ready for the summit and would enforce the internal security law to have more power to handle the situation, he said in his weekly Sunday morning television program.

“Police alone might not be able to control the situation. We need military and civilians to help take care of security matters,” he said.

Prime Minister Abhisit decided to postpone a major Asean summit with partners from Asia and the Pacific region after red-shirted protesters stormed into a convention hall in Pattaya last month.

The government has proposed the new meeting to be held on June 13-14 in Phuket, a well-known stronghold of the ruling Democrat Party.

The official dates have not been fixed yet as some foreign leaders could not reschedule their foreign travel. However, most of the leaders have responded to the Phuket summit in a positive way, he said.

Asean Secretary-General Surin Pitsuwan said last week that more than half of the 15 leaders had agreed with Thailand’s proposal.

PM Abhisit said he did not want to see any protests during the Phuket summit. “But if there are protests, it should be in accordance with the law,” he said.

“Asean is important for the country’s reputation, dignity and international confidence, and we should not bring our internal problems there,” he added.

The prime minister insisted that he would not allow a recurrence of the Pattaya incident.

The Democratic Alliance Against Dictatorship (DAAD), comprising the red shirts, has not been dissolved despite the military crackdown on Songkran Day. They gathered yesterday at a temple in Don Muang in a show of strength amid heavy rains in the afternoon.

They threatened last week to protest at the Phuket summit if the government does not bring the blue-shirted men to justice. They accused the blue group of setting up violence to facilitate the military crackdown against the red group.

DAAD leader Jatuporn Promphan said yesterday at the rally that the red group was “set up” to attack an empty bullet-proof car at the Interior Ministry on April 12.

Mr Jatuporn claimed PM Abhisit had changed to another car with the same license plate and had tricked the angry mob, which he said comprised mostly military officers in red shirts, into attacking the car.

PM Abhisit said in his televised program that he was in the car when the angry mob attacked the car.

The red rally yesterday was closely monitored by police since some of DAAD leaders were arrested and granted bail on the condition that they would not provoke any mass uprising said Police Maj Gen Saroj Phromcharoen of the Metropolitan Police Second Region.

More than rooms for sale at Thai hotels