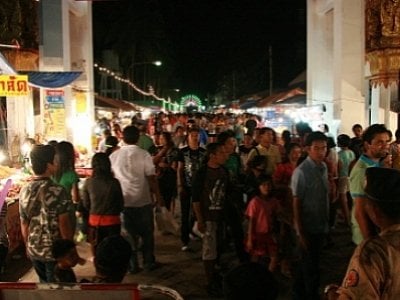 PHUKET: The girl who vanished from the Chalong Temple Fair on Wednesday was lured away by a teenage boy named “Bow” and taken to Patong, her family has learned.

They fear the youth may be planning to sell her to a brothel.

La-ongda “Tanyong” Narmsra, 14, was reported missing on Wednesday by her mother. See our earlier report here.

La-ongda’s family are amusement park ride operators from Nakhon Sawan. They travel around he country and were working at the Chalong Temple Fair when the young girl disappeared.

“It is her first time coming here. Whenever we go out, we always go together. Except the day we went to Tesco-Lotus for shopping, when Tanyong was left at the fair with my subordinates,” said Tanyong’s grandfather, 50-year-old Singh Narmsra.

“While her parents and I were at Tesco, she called me many times asking when her father would come back. This was very suspicious. I think she was trying to check where we were so she could slip away easily,” he said.

“We rushed back to the Chalong fair around noon, but she had already gone,” said Mr Singh.

“We keep trying to call her, but her phone is always off. We have been looking for her for two days and two sleepless nights,” he told the Gazette yesterday morning.

“Tanyong is a quiet girl. She always listens to songs and plays games on her mobile phone. She is still young and trusts people easily,” he said.

A boy named “Bow” was seen leaving Chalong Temple with Tanyong and another girl on Wednesday morning, he said.

“I have never seen Bow before, but I know that Tanyong talked with him on the phone,” said Mr Singh, who estimated the boy’s age at about 15 or 16.

“Bow was working with a toy vendor. The toy vendor told me that Bow worked in a market in Nakhon Sri Thammarat before coming here. I think he may have met Tanyong there around New Year, when the toy vendor and I set up booths nearby,” he explained.

The family worked fairs in Nakhon Sri Thammarat, Surat Thani and Krabi before coming to Phuket. They had planned to work the upcoming temple fairs in Cherng Talay and Thepkrasattri as well.

“But now we feel like we just want to go home to Ayudhya,” he said.

“My wife has a heart condition and has fainted many times since Tanyong left. We do not know what to do now. We are not local people here,” he said in tears.

“I’m afraid Tanyong might have been tricked and will be sold to a brothel,” said Mr Singh.

Late yesterday afternoon Mr Singh told the Gazette he had talked to a boy named “X”, a friend of Bow, in order to try and track down his missing grandchild.

“X told me he got a call from Bow last night. When X asked him about Tanyong’s whereabouts, Bow said, ‘Come and get her if you want’. Then the line went dead,” he said.

Police later traced the call and learned that it was made from somewhere in Chalong, not far from the temple grounds.

As of this morning Tanyong was still missing.

X has since told Mr Singh that she is believed to now be in Patong, where the family will continue their search today.