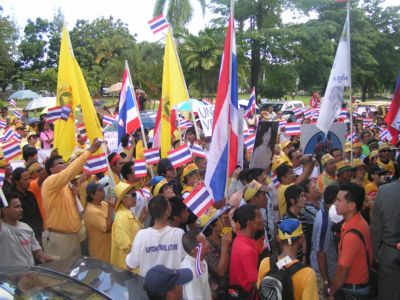 PHUKET CITY: The People’s Alliance for Democracy (PAD) marched through Phuket City this afternoon on their way to deliver a letter expressing disappointment at the central government’s handling of the Preah Vihear Temple saga.

About 300 PAD members led by PAD leader Natjarong Ekpermsup met at about 1:30 pm in front of the Tourism Authority of Thailand office on Thalang Rd before marching to Surin Circle, Narison Rd and on to Provincial Hall, where they were met by Phuket Vice-Governor Tri Augkaradacha at about 2:30 pm.

The protesters, armed with flags and yellow bandanas, carried banners decorated with statements such as “Government treacherous” and “Unesco Very Crazy”. Some protesters sang patriotic songs while others chanted “Noppadon go to jail” and “Government get out”.

Street vendors and bystanders met the marching group with cheers as the protesters made their way around Phuket City.