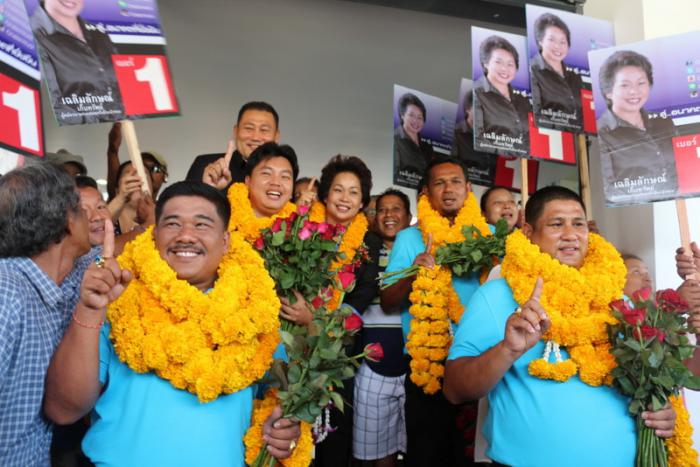 PHUKET: Former Patong Mayor Pian Keesin, recently found guilty of vote fraud, is back on the battlefield for the chance to reclaim his position as leader of Phuket’s premier party town.

Registration opened yesterday for Patong Mayor potentials and municipality council members amid a crowd of supporters.

So far, Mr Pian has only one opponent, former Phuket MP Chalermluck Kebsab. Registration will remain open to candidates until Monday at 4:30pm.

Mr Pian was suspended from his post in September last year (story here). He was found guilty of vote fraud earlier this month, but the court issued him a “yellow card”, allowing him to run for re-election (story here).

In accordance with Election Commission (EC) rules, any candidates who arrive before registration opens on the first day are entitled to draw numbers for the opportunity to win the “Lucky Number 1” slot on the ballot.

Nine candidates have registered so far.

“Two members from District 1, Praset Phatkor and Narong Cheuayuan, as well as one member from District 2, Weerapot Iabsab, received ‘red cards’ from the court for importing voters. These council spots are now vacant and the previous members cannot run for re-election,” said Mr Poonsak.

“However, Weerawit Kurasombut from District 3 received a ‘yellow card’. He has applied for re-election into the council for District 3.”

The two mayoral candidates took the opportunity yesterday to highlight their objectives as mayor, if they were to be elected.

Mr Pian vowed to resume his hard work as mayor if re-elected.

“Our problems cannot be solved in one day. I will continue to push hard to make Patong a better place,” said Mr Pian.

“My previous and future actions as mayor will prove my words. We hope that people will vote for me and allow me to continue working for a better future.”

Ms Chalermluck voiced the major issues she would attempt to conquer if chosen as mayor, and urged Patong to give her a chance to make things better.

“It now depends on the people of Patong to move the town toward a better future. I cannot do it alone, I need a hand from the people,” she said.

More than 60 per cent of eligible voters are expected to show up for the April 26 election.

“Patong has about 12,000 registered voters. We are expecting a close race next month,” said Mr Poonsak.

The election will usher in an alcohol ban specifically for Patong, which will start at 6pm the night before and end at midnight the day of the election (story here).

Wastewater the source of rancid water on Phuket beach