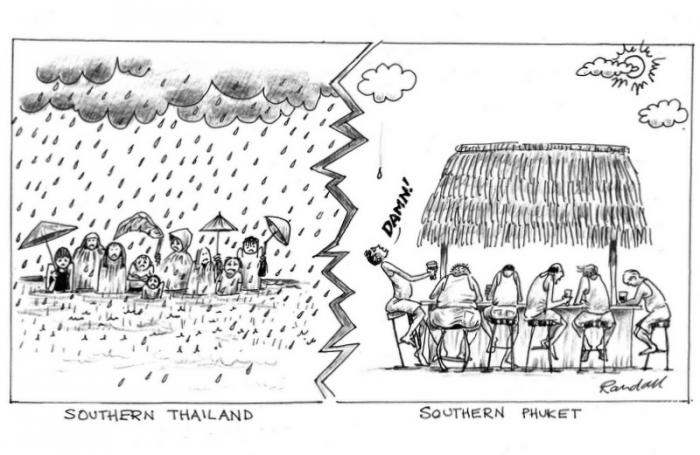 PHUKET: As a regional tourism and transport hub, Phuket has an important role to play in easing the hardship of the hundreds of thousands of people who have been affected by the worst flooding in the Thai south in decades.

Our island is fortunate to have been spared the kind of severe flooding that has stricken much of the region in recent days and weeks – with no apparent end in sight.

Unfortunately, coverage of the inundation in the international media has been somewhat misleading.
Reports have predictably focused on the death toll, with the figure having surpassed 30 lives at the latest count.

In reality, few deaths have been the direct result of people drowning in raging floodwaters. In fact, the numbers are probably fewer those attributed to road deaths in the region during the recent holiday safety campaign.

Of course, the total amount of human misery and property loss will be far higher. It continues to grow with each passing day as floodwaters get dirtier, access to essential supplies remains cut off, and local economies remain in a virtual state of suspended animation.

Other reports, including some by major international news agencies, incorrectly stated that heavy rain was uncharacteristic to the Thai south this time of year.

The climate in the Isthmus of Kra is characterized by an annual reversal in monsoonal flow. From May to November, a westerly monsoon predominates, bringing copious amounts of rainfall to Phuket and other Andaman Coast provinces.

It is also important to keep in mind that the recent flooding stems more from bad land-use management and planning as it does from any statistical rainfall anomaly.

From large-scale effects such as global warming, all the way down to bad individual decision making, the recent flooding once again reveals that short-sighted, profit-driven processes need to be replaced with more forward looking ones to better deal with the realities that confront us. Welcome to 2017.