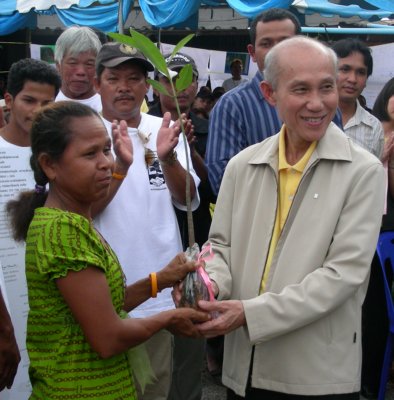 PHUKET CITY: Phuket is due an injection of greenery with the news that a memorandum of understand (MOU) has been signed by Deputy Prime Minister Paiboon Watthanasiritham stating that one million mangrove trees will be planted around the island between now and the end of 2009 as part of the nationwide Yoo Dee Mee Suk (“Good Life and Happiness”) program.

Mangroves will be planted in tidal areas to help support aquatic ecosystems and provide food for consumption or trade by villagers. Animals such as crabs and mussels have had their habitats threatened as development has taken its toll areas where mangrove forests once stood.

K. Paiboon, also minister of Social Development and Human Security, was in Phuket yesterday to chair a meeting at Royal Phuket City Hotel attended by government representatives from Phuket, Phang Nga and Krabi.

In March, the government approved the Yoo Dee Mee Suk project, which involves developing community-based strategies to protect natural resources. Budgets were allocated to provinces according to population and average income.

Phuket received 63 million baht, while Phang Nga and Krabi were each granted 70 million baht each.

In Phuket, 58.7 million baht has already been used on some 366 projects, while Phang Nga has spent 60.4 million baht and Krabi has used up all of its alloted budget.

At the meeting, K. Paiboon announced that the government will allot a further 15 billion baht to the Yoo Dee Mee Suk project in 2008. The next government will continue to fund the project and help develop it, he added.

“We have a problem with the villagers at the moment. They are not aware of the purpose of the project. We need them to manage their projects first and then report to the province how successful they are. One project that is already a success in Phuket is the teaching of diving skills to Sea Gypsies,” said V/Gov Worapoj.

In August, sea gypsies at Rawai, Laem Tukkae and Tah Chat Chai took part in a five-day dive course aimed at integrating them into the island’s mainstay economy – tourism.

K. Paiboon visited Tha Rua Mai village in Rassada after the meeting to sign the MOU with 30 community leaders.

The one-million trees, to be planted by villagers over a two-year period, will cover some 2,000-rai by the project’s end.