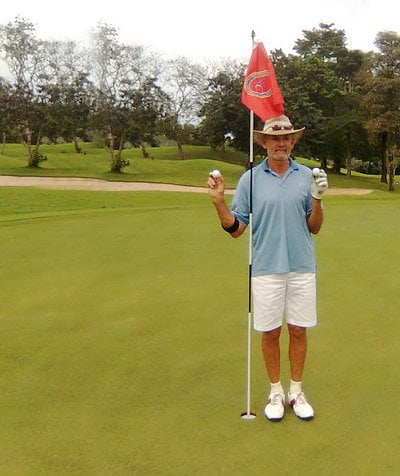 PHUKET: Long-term Phuket resident John Connelly, 58, smashed all records Saturday morning when he carded two holes-in-one in a single round of golf at Phuket’s Blue Canyon Country Club. According to an estimate published in Golf Digest magazine, the odds of such an occurrence are about one in 67 million!

The week had started auspiciously for the Florida-born Connelly, who despite more than 30 years of golf had never achieved or even witnessed a hole-in-one. On the Monday, he had played a round with Jimmy Nixon and Greg Hoing on the Lakes Course at Blue Canyon. On that occasion, Hoing aced the 175-yard 8th hole.

For those with tendencies toward superstition, it should be noted that Jimmy Nixon is a veteran of no less than four holes in one. But associations and super-natural influences cannot wholly account for the phenomenon recorded by Connelly on Saturday. Skill was definitely in the equation.

He told the Gazette that after he thought he saw the first ace of his life disappear into the cup on the second green, he went “from hope to disbelief to sheer joy.” Then his overriding thought became: “Great – you’ve now done it, but wouldn’t it be nice to post a decent score [as well]?”

And what might such a score have been? “For me, from the championship tees, I was thinking sub 90. My best ever [from those tees] had been an 86,” he says.

As for his second ace of the day, he says: “I chose my three wood again…. At impact I know I did not get all of it… [but] the flight is high with a hint of fade. She lands on the front of the green, three to four yards short and left of the pin. As it releases, I yell ‘Go in the hole!’ It dropped center cut.”

And with the drop, Connelly enters the record books of golf worldwide.

Golf: Two holes-in-one, one man, one game in Phuket