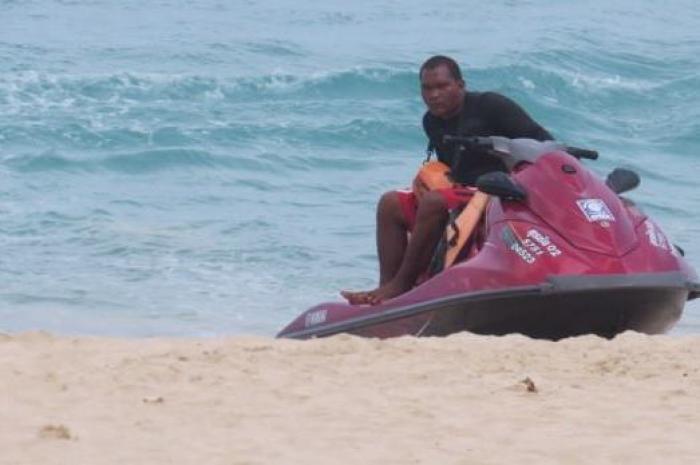 PHUKET: As part of a long series of ‘last-time’ threats, the Marine Office Region 5 acting chief vowed yesterday that if jet-skis are spotted at Surin Beach again, the operators will have their licences revoked.

“I am aware that four jet-skis were spotted at Surin Beach Tuesday.* The operators are allowed to rent the jet-skis at Bang Tao Beach, but they must not be taken to Surin,” said Phuripat Theerakulpisut, who was recently promoted from Phuket Marine chief to the acting head of Region 5.

“I spoke to the operators and made it clear that there would be consequences if the jet-skis were spotted at Surin again.”

In May, Mr Phuriphat investigated reports and photographic evidence of jet-ski touts allegedly bringing the machines onto Surin Beach, as well as allowing them to be driven dangerously close to swimmers (story here).

Despite the men in the pictures appearing to be jet-ski touts, the operators insisted that those who appeared on Surin Beach were in fact tourists.

“Either way, what happened in the past is in the past. From now on, if a jet-ski is spotted at Surin Beach, the operators will be held responsible – it doesn’t matter if the rider is a tourist or not,” Mr Phuripat said.

Jet-ski safety issues were a topic of discussion during the Dutch ambassador to Thailand’s recent visit to Phuket. The ambassador claimed that the jet-ski businesses were damaging Phuket’s tourism industry (story here).

Despite concerns raised by a number of ambassadors, the overwhelming majority of tourists and the public at large, Mr Phuripat insisted to the Phuket Gazette that jet-ski operators are well controlled by his department and present ‘no problem’ for the island.

* The Gazette originally reported the sighting as happening on December 3.