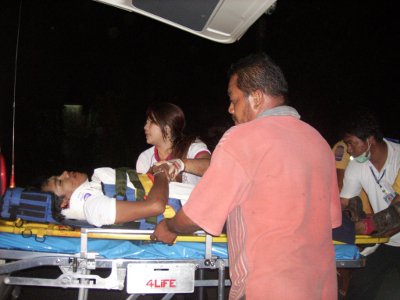 PHUKET: One man died and his two passengers were injured when a pickup slammed into a tree at a notorious blackspot in Phuket’s Thalang district early this morning.

The late Mr Prakit, listed as a resident of Khlong Thom District in Krabi, was driving two female friends home from their work in a Cherng Talay restaurant when his late model pickup truck slammed into a tree at the Khok Moo Curve on Srisoonthorn Road, about one kilometer west of the Heroines’ Monument.

A Kusoldharm Foundation rescue team worked for about an hour using “jaws of life” equipment to cut through the driver’s door and remove the unconscious Mr Prakit from the vehicle, which bore Nakhon Sri Thammarat license plates.

While working to free Mr Praskit, the first-response team applied a neck brace, administered oxygen to help him breathe and provided other first aid.

Mr Pakit was alive when the ambulance arrived at Thalang Hospital, but he died a few hours later from what doctors described as massive trauma to the chest and lungs incurred by his impact with the steering wheel.

The woman in the passenger seat, identified as Srisoonthorn resident Juthamat Kingkanha, was rushed to Thalang Hospital for treatment of minor injuries.

The crash happened just 200 meters from her home in the Tawan Place housing estate on Srissonthorn Road.

The third passenger, sitting in the rear cab, was taken to Vachira Phuket Hospital in Phuket Town for treatment of minor injuries.

An initial investigation revealed that Mr Prakit lost control at the Khok Moo (“Pigpen”) curve, the site of many accidents over the years.

There were no signs that another vehicle was involved, according to rescue workers at the scene.

They added that Mr Prakit would likely have survived if he had been wearing a seat belt. The late-model vehicle was not equipped with airbags, they noted.