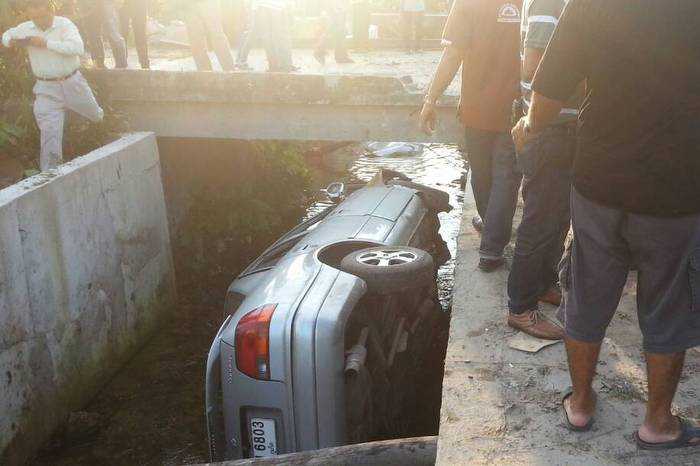 PHUKET: One woman died and a father and daughter were rushed to Vachira Phuket Hospital with critical injuries after their car crashed into a roadside canal yesterday in northern Phuket.

Police and Kusoldharm Foundation rescue workers were called to the scene, on Thepkrasattri Road northbound, about 200 meters from the Hongyok Bumrung School in Baan Suan Maphrao, at about 5:15pm.

They found the car on its side in a two-meter-deep canal, Lt Thanom Thongpan of the Tah Chat Chai Police told the Phuket Gazette.

The car was travelling at high speed when the driver, Mr Surin, suddenly swerved to avoid hitting a car in front, said Lt Thanom.

Local villagers helped to pull the four victims out of the car while waiting for rescue teams to arrive, Lt Thanom said.

Ms Saisamon died at the scene, and the family of three were taken immediately to Thalang Hospital for initial treatment.

Ms Supawanee was discharged soon after, as she had only minor scratches and bruises, said Lt Thanom.

“However, Mr Surin and Ms Sunida were transferred to Vachira Phuket Hospital for further treatment because of the severity of their head and internal injuries,” he said.

“They are in critical condition in the Intensive Care Unit.”

Victories down to seconds at Phuket King’s Cup Regatta