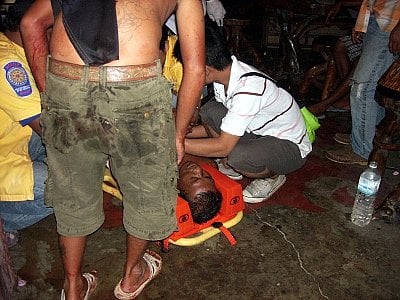 PHUKET: One man is dead and four others, including a woman, are injured after a pub brawl ended in a shooting frenzy in Phuket early this morning.

Lt Col Somkid Khaosang of Cherng Talay police station said police received a call at 1am saying people had been shot at the Return Pub, across the road from Cherng Talay Witthayakom School.

He arrived at the scene with fellow officers to find four men and a woman, 25-year-old Sumaporn Tontarn, wounded by gunshots.

Two men were seriously injured. Suthin Suekpamkij was shot in the head and 27-year-old Weeradet Sanohkham, from Surat Thaini, was shot several times, one of his wounds in the chest.

Around 2am, Mr Suthin and Mr Weeradet were transferred to Vachira Phuket Hospital in Phuket Town, where Mr Weeradet died from his injuries.

Police have yet to release the name of the shooter, though officers at the scene reported that he did not try to escape.

Instead, he waited for officers to arrive at the pub so he could surrender, the police say.

Initial reports indicate the shooting followed an argument over “a woman”, they say.

At the time of writing, the police would not confirm whether the argument was over Miss Sumaporn or not.

One witness reported that the man was sitting alone and was apparently “attacked” by the group of five, all local residents, before he opened fire.