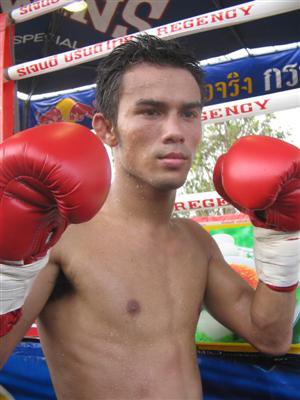 The fast-fisted Oledong, 23, is the pride of Trang’s Rassada District. He won the WBC title by beating fellow Thai Eagle Den Junlaphan on points in Bangkok in November, 2007.

The contest will be Oldeong’s second title defense here in Phuket.

In his first, at Saphan Hin in June last year, he knocked out Japanese boxer Junichi Ebisuoka in Round 9.

In his second defense, he triumphed with a unanimous decision points victory over compatriot Pornsawan Porpramook in Phitsanuloke last November.

His opponent, Muhammad “Rock Breaker” Rachman, is a former IBF minimum-weight champ. In his last fight, held in Cebu in March this year, he lost a unanimous points decision against hometown favorite Milan Melindoof.

Boxing analyst Scott Mallon said that at 38 years of age, Rachman is well past his prime and most likely will have a very difficult time against the speed of Oledong.

Young champs generally like to fight aging former champions as a way to make their career records more impressive. Unless he pulls off a huge upset, the fight could be Rachman’s last big pay day, Mr Mallon said.