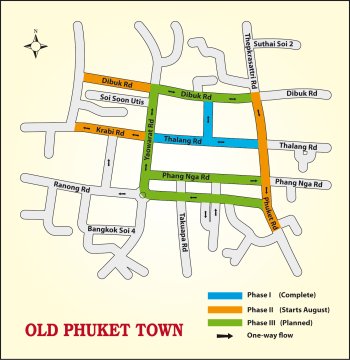 PHUKET: Having passed the public hearing process with almost unanimous approval, the second phase of the project to bury electric cables in Old Phuket Town will get underway in August, with scheduled completion in March 2011.

The project contractor will have 240 days to complete the 57.4-million-baht job, which will cover:

– 250 meters of Krabi Road, between Yaowarat and Satun roads;

– 250 meters of Dibuk Road, between Yaowarat and Satun roads;

– Thepkrasattri Road, from the bridge at Taewnam Intersection north to Thalang Road junction.

Based on concerns raised by members of the public during the hearings, the Phuket City Municipality has agreed to use smaller, more flexible wire than that used in the first phase, which covered the west end of Thalang Road and Soi Romannee.

Also, the above-ground lengths of wire will be painted to match the exterior color of the homes they run along.

There is also a secondary budget of 11.7 million baht divided among three public companies for improvements to the telephone network in the area:

Cable television operators will also be called upon to share in the expense of installing a cable to continue providing services to subscribers in the area.

Most people living and running the businesses on Thalang Road expressed satisfaction with the first phase project, which took six months in the latter half of 2009 to complete.

“The road looks clear and tidy. It would be good if they could do this over the whole island,” said 47-year-old Marium Yomdee, who has been running the Ban Thalang clothing shop for over two decades.

Twenty-five-year-old Singha Lumkaew of Nakhon Sri Thammarat, who has been helping his aunt run the Wanchan Restaurant for over a year, said, “I agree with the project because it makes more people visit the area and come into the restaurant. The road also looks better.”

Dr Prasit Koeysiripong, President of the Old Phuket Town Foundation, said burying the cable was a good idea, but pointed out that not all of the cable went directly from the underground conduit into homes.

Budgetary and technical constraints meant that the cable had to come out of the ground and be distributed to one house first, then five or six others through a cable running along the face of each building.

Although far from perfect, the work allowed for the removal of power poles, he explained.
“But it is still very good; much better than before,” he said.

There were some dissenters, however. One 66-year-old shop owner who has lived in the area his whole life said he was unimpressed by the changes and was inconvenienced by the work that brought them about.

“During the construction work the traffic was terrible and it took half an hour to get from one end of the road to the other. The leftover cable was just left on the road and officials didn’t do a good job tidying up after the work was done. The old way was good enough and I don’t think we needed to change. Now, if there is a short circuit it takes a full day’s effort to pinpoint where the problem is. Also, if any buildings undergo construction work there are bound to be more problems. I don’t think it looks that great either,” he said.

Burying cables is a good idea when planning new cities and developments from the outset, but burying cables in old neighborhoods like Thalang Road creates a lot of clutter said the man, who asked to remain anonymous.

“It looks better than it did before. There is no point trying to compare it to a new city. We need to accept that,” he said.

Five murders in Phuket in June