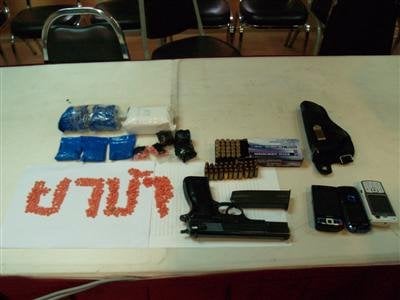 PHUKET: June proved a murderous month for Phuket as a wave of violent crime swept across the island with five murders and 14 cases of manslaughter being reported, according to the latest crime statistics released by the Phuket Provincial Police.

Among the unsolved cases is that of the murder of bar hostess Wanphen Pienjai, 33, whose naked body was discovered stuffed into a suitcase in a remote area in Wichit on the morning of June 24.

Ms Wanphen was last seen alive when she left Sweethearts Bar in Kata with a brown-bearded, blue-eyed foreigner on June 18.

For the previous report with composite sketches of the man Ms Wanphen left the bar with click here.

Despite a 50,000-baht reward for clues, police have yet to make an arrest in the case.

At least one ‘person of interest’ was cleared after his picture was shown to staff at the bar, who said he did not resemble the man Ms Wanphen left the bar with.

Police have asked the media not to report other leads case officers are working on in order not to jeopardize the investigation.

The five murders this June more than doubled the figure from June 2009, when two cases were reported.

In other crimes resulting in death, there were nine arrests in 14 reported cases of manslaughter, the same number of cases as in June last year.

There were also 14 cases of assault reported, with nine arrests.

There were 35 reported cases of theft with 27 arrests during the period, and four cases of motorbike theft reported with arrests in all cases.

Eight reports of theft led to just one arrest, while there were no arrests in 16 reported cases of embezzlement.

Once again drugs topped the arrest statistics, with 397 people arrested for illegal possession or sale of controlled drugs in 374 drug cases.