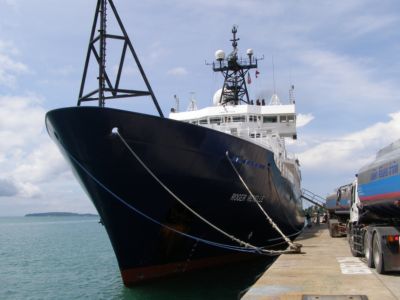 AO MAKHAM: A multinational group of oceanographers has completed a survey of the fault zone that caused the 2004 tsunami and early results show that the quake also caused a massive landslide.

The R/V Roger Revelle, a 75-meter research vessel from the Scripps Institution of Oceanography in California, berthed at the Deep Sea Port at Cape Panwa yesterday after completing a 39-day study of the sea floor that involved coring of seabed sediments.

The focus of the research, led by Dr Chris Goldfinger of Oregon State University, was the the Java Trench subduction zone off the coast of Sumatra, near the epicenter of the 9.3-magnitude earthquake that triggered the 2004 tsunami.

The research team comprised 59 scientists, including oceanographers from Germany, Japan, Spain and Indonesia.

Dr Goldfinger said initial results indicated that the research had detected evidence of the submarine landslide caused by the earthquake, but that the data need further analysis back in the US.

While the research was useful, there is still no way to accurately predict or prevent tsunamis from occurring, Dr Goldfinger said.

For this reason, a reliable early warning system must be installed in risk areas and people living in such areas must have confidence in it for it to be effective.

In few days, the Roger Revelle will leave Phuket to begin its next mission: mapping a 4,000-kilometer volcanic ridge in the Indian Ocean known as the “90-East Ridge”, which is the longest of its type on earth.

The research on the 50-day survey will be led by Dr Will Sager, a professor of oceanography at Texas A&M University.

Scientists have believed for many years that the ridge formed naturally from rising magma from the mantle where the Indian Plate drifted northward into the Eurasian place, sequentially forming a line of volcanoes. That theory has come under criticism in recent years, so the mapping will try to determine how the ridge actually formed.

Seismic techniques will be used to probe into the sediment layers.

Another part of the research will involve using 19th-century dredging techniques to collect exposed volcanic rock samples along the ridge flanks, at depths from 2,000 to 4,000 meters. The rocks will then be analyzed onshore for chemical composition and age.