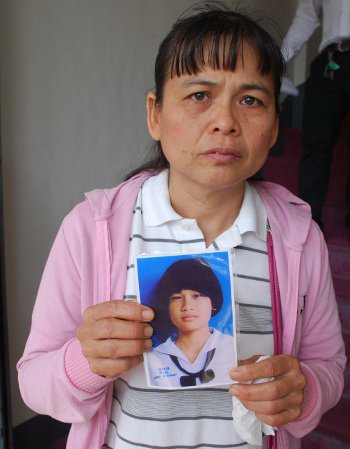 PHUKET: The desperate mother of Samudchaya “Nong Pin” Yanpunya yesterday met with the Phuket governor to seek high-tech help in tracking down her missing 12-year-old, who vanished without a trace over six weeks

She is particularly keen to uncover details concerning a Facebook friend invitation that Nong Pin accepted just prior to her disappearance. The girl was last seen leaving an Internet cafe near Soi Lorong in Phuket Town.

Mrs Samruay, who has been tirelessly searching for her daughter, told Governor Tri that she had heard nothing from Nong Pin since she went missing.

“The reason I came to see Governor Tri today was to ask him for help in contacting the Ministry of Information and Communication Technology to trace the exact location where the latest activity on Nong Pin’s Facebook was conducted,” said Mrs Samruay.

“Her last Facebook activity was a ‘friend request’ from a person with user named ‘Aung’, which was accepted. The Facebook page did not show when, but it was recent,” she said.

After a Phuket Police investigation failed to find Nong Pin in Phuket, Mrs Samruay took the search to Bangkok.

“I went to ask for help at many places: The Mirror Foundation, Pavena Foundation for Children and Women, Crime Suppression Division Police and other places who work with children, but I still haven’t heard back from any of them,” said Mrs Samruay.

“I am quite confident that my daughter has been kidnapped. If she had gone with friends she would have made a contact by now,” she said.

“Even though we don’t live together, I talked with her all the time. Even when she became a teenager she would still tell me everything,” she added.

Nong Pin went to live with her grandparents after her parents’ marriage broke up.

At the meeting Governor Tri promised to do all he could to help Mrs Samruay.

“I will coordinate with those who have the authority to conduct an Internet trace. I will also ask the police to continue to investigate and follow up on this case,” said Governor Tri.

Phuket poll: How to steer kids clear of “corruption mindset’?