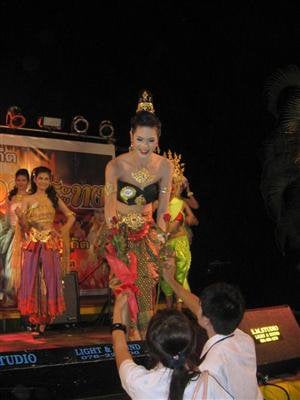 The event, now in its second year, was held as part of the school’s Loy Kratong celebrations.

Nong Peach, 19, is studying performing arts in the school’s Faculty of Humanities and Social Sciences.

Most of the contestants were from Phuket Rajabhat, with a few representing Prince of Songkla University, Phuket Campus.

A panel of five judges decided the outcome, with about 1,000 people in the audience playing a role by buying and presenting roses to their favorite contestant.

The number of flowers received was taken into consideration by the judges in their overall assessment.

In the more traditional competition, 22-year-old Jiraphan ‘Nong Peung’ Kaewthong was voted as the ‘Miss Noppamas’, beating five other beauties to the title.

Nong Peung is a third-year student majoring in human resource studies in the Rajabhat Faculty of Business Management.

Phuket Gov and consuls to talk through problems