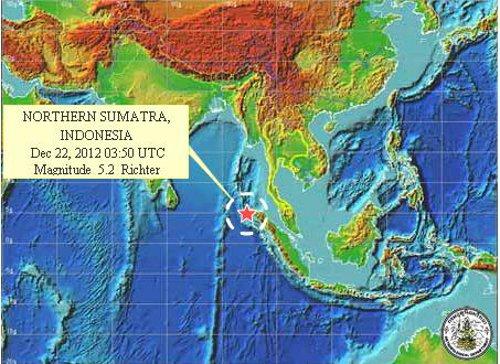 PHUKET: No tsunami alert has been issued for Phuket or other provinces along the Andaman Coast following a 5.2 earthquake off the northern tip of Sumatra, Indonesia, at 10:50am today, the head of the Department of Disaster Prevention and Mitigation Phuket office has confirmed.

“The National Disaster Warning Center has not issued a tsunami warning alert. We expect that the earthquake will not trigger a tsunami that will affect the Andaman region, ” DDPM-Phuket chief San Janthawong told the Phuket Gazette.

Although the earthquake struck 122 kilometers from Banda Aceh, which lost more than 100,000 people to the 2004 tsunami, Mr San said this morning’s earthquake was no cause for alarm.

“This earthquake measured only 5.2 on the Richter scale and was 60 kilometers deep, so we believe that it will not affect us. However, we are monitoring the area and we are well prepared to take action if necessary,” he said.