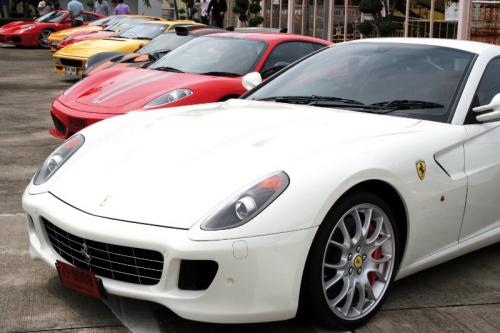 PHUKET: No Phuket luxury cars are on the list of 488 supercars whose owners are being investigated for tax evasion, the Department of Special Investigation (DSI) has confirmed to the Phuket Gazette.

The DSI on Monday revealed the names of the owners of 488 luxury cars who will be called in for questioning in a nationwide crackdown on supercar tax evasion (story here).

A DSI officer who declined to give his name told the Gazette, “Of the cars we are investigating, 71 cars are registered in Bangkok, 205 in Nonthaburi, 86 in Saraburi, 59 in Ayutthaya, 21 in Nakhon Pathom, 20 in Prachin Buri, nine in Ang Thong, eight in Si Sa Ket, seven in Nakhon Nayok, one in Ratchaburi and one in Chiang Mai.

“The owners of any of the 488 cars must send their car documents to us between June 17 and June 23. On June 24, we will start asking the owners to bring their cars to us for inspection,” he said.

“If any of them do not submit the documents to us by June 23, we will send them a warrant requiring them to bring their car and documents to us,” he explained.

“For more information about whether or not your car is being investigated and to set up an appointment to inspect your car, please call us at 086-3188651,” he said.

However, the officer added that the list of 488 vehicles was only the first list to be drawn up. Other lists will be compiled and investigated, he said.

DSI chief Tharit Pengdit estimated that tax evading luxury cars probably cost the country 20 billion baht in lost revenue. The estimate was based on the assumption that more than 8,000 luxury vehicles in the country had been or were about to be registered illegally.

Phuket Land Transport Office chief Terayout Prasertphol today confirmed to the Gazette that his office has only registered legal vehicles and that all taxes are fully paid on all vehicles registered in Phuket.

However, he admitted that was not always the case.

“In 1998, Phuket was a target for illegal vehicles, mainly stolen cars, to be registered. Back then, it was popular for Ferrari and Mercedes-Benz cars and Harley-Davidson motorcycles to be registered here,” he said.

“At that time I was the PLTO administration chief, and five owners of Ferrari and Mercedes-Benz cars and Harley-Davidson motorcycles were arrested.

“It took about six years for the case to be finally heard in court, but one PLTO officer was fired and another government officer was sentenced to one year in jail,” Mr Terayout said.

“Since then Phuket has been very strict on making sure no illegal cars are registered here and that all taxes are properly for all vehicles registered.

“I have received calls from people asking to illegally register cars, but I turn them down, so they go to other provinces,” he added.