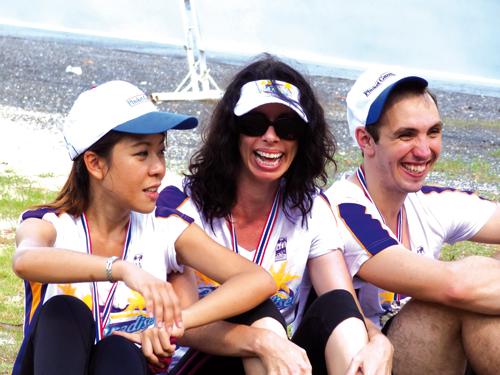 PHUKET: Homo sapiens have evolved as persistence hunters. We are designed to go the distance, to plod along behind any quick footed antelope on the open prairie until the poor bugger, all sprints and no stamina, gives up the ghost – the Laguna Phuket International Marathon was a testing ground of our evolution.

“We are a species of runners,” I, one of hundreds standing at the start-finish line, mumble to myself.

Each runner, no doubt, was giving themselves their own personal pep-talk, laying out a course-attack plan, setting mental goals or reviewing the necessary pace to keep the pack moving. And within that crowd I, an under-trained cubical-junky, wasn’t alone.

It is easy in the pre-dawn gray to imagine our ancestors striding out, long smooth steps propelling them forward, their faces calm and determined as they keep some poor grassland creature on the move.

Luckily, we can sweat. As an office worker, sweat seeping through a dress shirt as I rush from one air conditioned building to another is the bane of my so-called-stylish existence. However, sweat is our species’ edge on the rest of the Animal Kingdom.

As the 11-kilometer marker comes into sight, everyone on the road, either consciously or unconsciously is grateful for the sweat as it continues to glisten on our skin, soak through our tops and keep us cool.

Though there is no four legged meal at the end of our run, if there was, it would eventually have to slow its pace to pant in order to cool down. Panting and speed simply don’t go hand in hand.

“Keep the pressure up, keep your feet moving,” I mumble in the tropical heat.

Despite our evolutionarily advanced running-cooling system, by the 14-kilometer marker the ice cold sponges being passed out by volunteers felt less like a luxury and more like a necessity.

The mostly silent race made the pounding footsteps of a true predator – a speedy full marathon runner – even more unnerving as they come up behind you. In that brief moment, before seeing a big smile and hearing encouraging words, it felt as if I had switched places with my ancestors’ prey, but I have no sprints, no fancy foot work to keep me safe.

Other runners were chatting; smiling, comparing times and totally at ease, I felt a sudden yearning to join their ranks.

It took millions of years to evolve into what our ancestors were, there is no way a handful of generations of pen-pushers could undo such a monumental achievement. Starting to smile and stretch myself, it became clear, I, like everyone else, am a member of a species of runners.