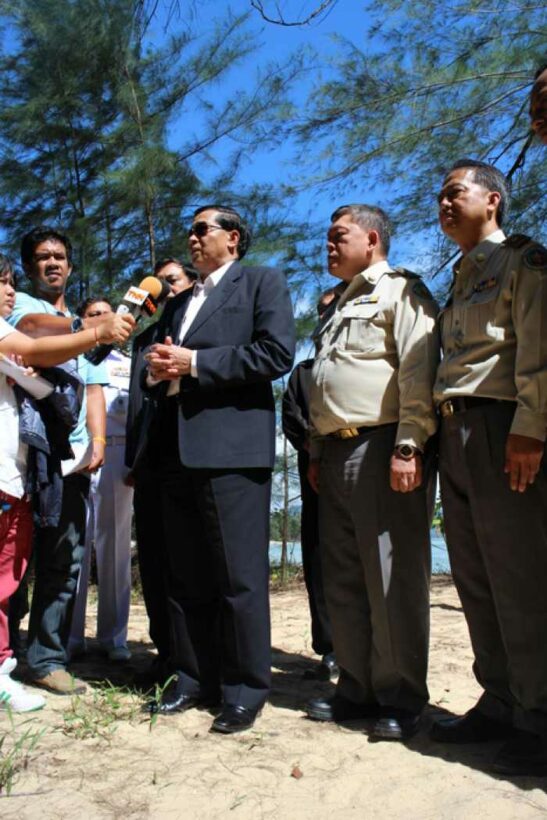 “The people at the root of the issue of encroachment in Sirinath Park go all the way up to the top… people who are too powerful for local authorities to bring to their knees,” Sirinath National Park Chief Kitiphat Taraphiban told the Phuket Gazette on Wednesday.

“We have yet to name the top people we suspect are responsible for stealing public land, as our case against them isn’t strong enough yet – we are still collecting evidence,” said Col Prawuth Wongsinil, chief of the DSI’s Consumer and Environment Protection Office.

“At this stage, I’m not sure how long it will take us to press charges against them. It depends on how long it takes local authorities, such as the Land Office, to submit the necessary documents showing the boundaries of each piece of allegedly owned land.”

Col Prawuth emphasized that his investigation would be pushing to charge those at the root of the issue, not necessarily the current property owner.

“We are not going after innocent people, such as those who bought the land from others without realizing that it was national park land,” Col Prawuth said. “However, we believe the original land owners were knowingly involved in stealing the land. They will face legal action.”

The DSI and other national level agencies were called in to push the investigation forward with the strong backing of the National Council for Peace and Order (NCPO), and Commander of the Royal Thai Navy, Narong Pipatanasai, toured the disputed park land by helicopter late last week (story here).

The land titles being revoked are SorKor 1 land-use documents, and three people have been identified as attempting to upgrade the documents into Chanote land title deeds. They were named by Mr Kitiphat as Nakorn Wongsrithong, Chan Pongpa and Anoma Fangsen (story here).

Some 14 other plots are also under investigation, 10 of which are resorts that were targeted by then-DNP Director-General Damrong Phidet (story here) in 2012. The other four were added during a subsequent parliamentary inquiry led by Narit Khamnurak, Chairman of the House of Representatives Standing Committee on Land, Natural Resources and Environment (story here).

At the time, Mr Damrong pointed out that the DNP stopped issuing Chanote titles for land in the Sirinath National Park area in 1964, making any such land title deeds issued at a later date illegal.

Additionally, all SorKor 1 “claim certificates”, which show the shape and size of the relevant plots, but do not give an exact geographical location, were held by only two people, and revoked in 1968.

Mr Kitiphat confirmed to the Gazette that all land-use and land title documents are signed off by Land Office officials.

“The name of the land owners and officials who certified the documents are written on the documents,” he added.

“The Sirinath land ownership issue is a complicated one that has existed for a very long time. We will work methodically to take back our national land. Those involved with encroaching will face justice, no matter how big they are,” Col Prawuth said.

“The park belongs to the country. Nobody has the right to own a national treasure.”