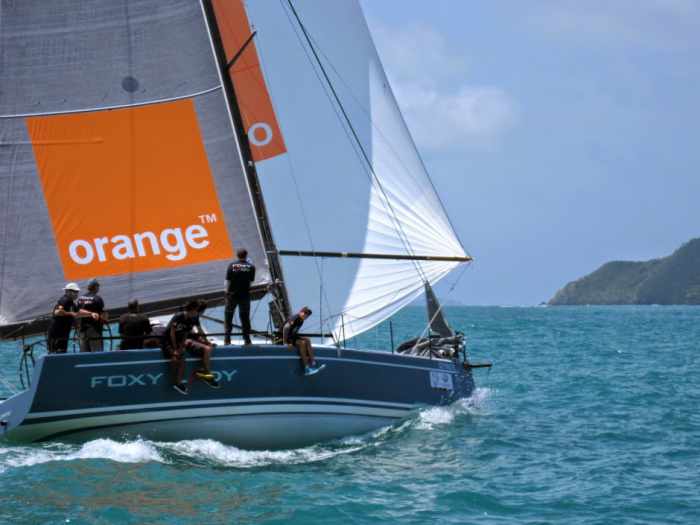 Winds eased to 10 to 12 knots off the east coast of Phuket, where the fleet of 35 yachts competed in the second day of racing in slightly larger, but smoother swell.

The conditions produced a flatter race course, yet the crew on Peter Ahern’s TP52 Oi! set their sights on “no mistakes sailing” today, after a spinnaker error cost them a strong lead in the first race yesterday.

The strategy delivered a solid performance, with Oi! scoring a second and a third place on handicapped corrected times in the two races today. The results were enough to pull them up into third place overall in the IRC 1 Racing class, but not enough to overtake Island Fling, who also sailed well to move into second place overall.

Mick Tilden’s Fujin fell off the pace today and slipped into fourth place overall, with Blue Note, despite nipping at the keels of the big guns all around the course today, closed the day in fifth place overall.

John Newnham’s Twin Sharks edged closer to defending the title of champion in the Firefly 850 class by blazing another two wins, while Neil Ayre’s Advanced Racing Mamba scored a win and a second place in the two races today to stay in contention for the title.

In bow-to-stern racing around the course, Hans Rahmann’s Voodoo held onto third place overall, ahead of Roger Kingdon’s Moto Inzi.

The battle of the “Stealth Cats” continued in the Multihull Racing Class with Alan Carwardine and his crew on board Asia Catamarans Hurricane scoring a win and a second place to hold onto top honors in class.

John Coffin’s Java won the first race of the day, but placed second in the closing race to remain in second place overall.

Phuket favorites Grenville Fordham and Bob Mott on the well-known Nina finished fifth in both of today’s races to close the day on 16 points. They now need to fend off challenges from Zam Bevan’s Corsair trimaran Bullet and Mark Horwood’s Adrenaline, who are also on 16 points.

Although the slightly lighter winds today produced some shifts, Principal Race Officer Simon James took the opportunity send the faster boats around the smaller islands off the east coast while sending the Classic yachts inshore.

The result was a treat for visiting yachtsmen to enjoy a racing view of the outlying islands while spectators on shore were bestowed a majestic sight the classic yachts, including the triple-masted Aventure, cruising the length of Chalong Bay.

Racing continues off Phuket’s east coast tomorrow. After two days of near perfect racing conditions, the breeze is expected to ease even more tomorrow and is likely to produce more inshore racing.

All results are provisional and subject to any protests yet to be filed.