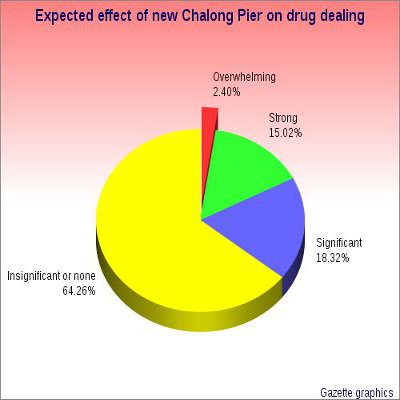 PHUKET: Phuket Gazette online readers are skeptical that the opening of the new Chalong Marina will have much of an impact on drug trafficking on the island, results of the latest readers’ poll reveal.

“Officials hope the opening of the new Chalong Marina, with improved Customs and Immigration controls, will lead to a decrease in drug trafficking on the island. How much of an effect on the island’s drug trade do you expect the new facility to have?”

Overall, a clear majority (64%) thought the new marina would have an insignificant effect on the drug trade – or none at all.

Almost one-fifth (18.3%) of respondents thought the new marina would have a “significant” effect, while slightly fewer (15%) thought the effect would be “strong”.

Only a tiny fraction of those taking part (2.4%) thought the new marina would have an “overwhelming effect” on the current drug-trafficking situation.

In a breakdown by demographic, local foreign residents were the most pessimistic.
Almost four-fifths (79%) thought that the new marina would have an insignificant effect on the sale of illegal narcotics on the island, or none at all.

Tourists were slightly less pessimistic, with half saying the impact would be insignificant or non-existent.

Thais taking part in the poll were more positive. A majority (65%) thought the impact would be “significant”, “strong” or even “overwhelming”.

A total of 327 people took part in the poll, which was posted last Monday.

To submit an idea for a poll question send an email to: polls@phuketgazette.net