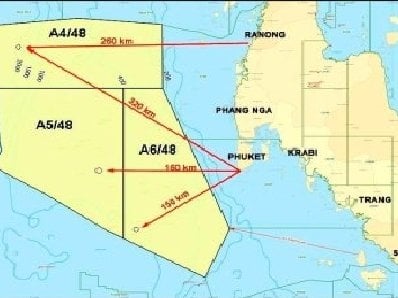 PHUKET: State oil firm PTT is conducting a study off the coast of Phuket that could lead to test boreholes being drilled there by 2012, the company says.

The work falls under the second phase of work being carried out by PTT Exploration and Production Public Company Limited, or PTTEP.

Visit Coothongkul, PTTEP vice president in charge of projects in the Andaman region, explained that the company has development rights to three concession areas covering a total area of 68,820 square meters off the Andaman coast.

Work on the three-phase project began in February 2007 with an environmental impact assessment (EIA) by consulting firm Pro-En Technologies and a seismic study by Malaysian firm CGGVeritas.

The first phase, which ran one year, was completed under a 200-million-baht budget.

The second phase, which runs three years starting from February 2010, started with a petroleum geology study that is now underway.

If the results are positive, the company will go ahead and drill test boreholes in three locations, one in each concession area.

If the geological study fails to detect significant reserves, PTTEP will have until February 2012 to return the concession areas to the government.

A press conference was held recently at the Phuket Merlin Hotel in Phuket Town to keep the public updated about the project.

Failure to provide such information could lead to negative public opinion, he said.

A press conference was held in Phuket in 2007 before phase-one work began.

Sidhichai Jayant, PTTEP vice president for external affairs, said good public relations was essential for such a large project given its potential environmental and social impacts.

BIS touch rugby tourney in Phuket open to all