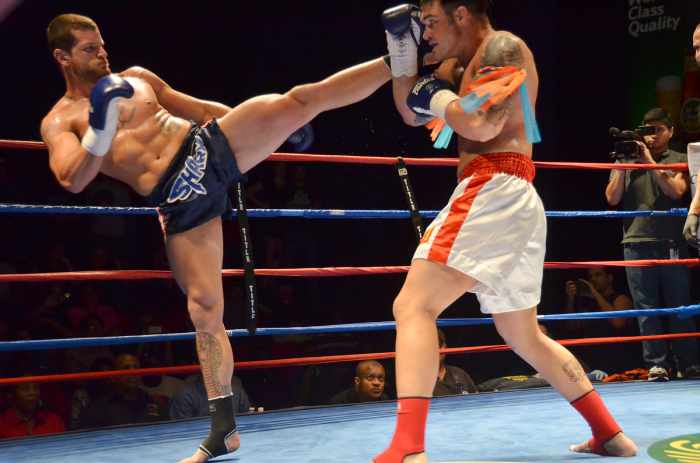 PHUKET: A new Muay Thai boxing stadium named Taied Stadium will open in Chalong on September 18.
The stadium is located at the heart of the island’s Muay Thai training scene on Soi Taied in Chalong, on the same site as a temporary stadium that hosted several fights earlier this year in order to gauge spectators’ interest.

The stadium’s owner, Tawatchai Boonrit, who was the promoter for Saphan Hin Stadium from 1987 to 2005, is seeking to diversify the island’s professional boxing scene, which until now has been centered on the Bangla Boxing Stadium in Patong.

According to Stadium Manager Andrew Lazarus, once open, the stadium will host seven or eight boxing matches every Monday and Thursday, as well as a Mixed Martial Arts (MMA) competition once a month on Saturdays.

“We will have international fighters from all around the world competing, as well as local fighters, and some of the main events will be streamed live on Epicentre.tv,” he told the Gazette.

“The stadium is contracted for two years,” added Mr Lazarus.

Stadium Promoter Sorit Boonrit, the son of the owner, said he hopes to attract tourists, local Thais, expat residents and Muay Thai enthusiasts training in Phuket to watch fights at the new stadium. He added that he is working with local tour agents to help draw spectators and will be arranging an island-wide transport service.

“Tourists will be able to purchase and book tickets by calling the office number or any good tour counter and we will have services to pick up customers from hotel and drop them back,” he said.