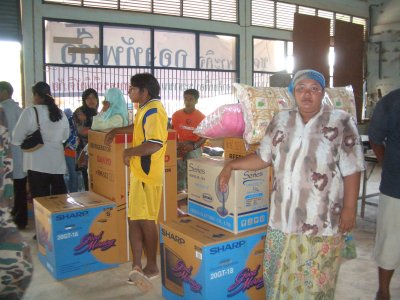 KOH LANTA: The Royal Thai Navy (RTN) yesterday handed over the last 16 of a total of 60 homes it has built for tsunami victims on Koh Lanta. The Navy builders will now move on to Koh Khor Khao, near Baan Nam Khem in Phang Nga, to build a further 28 houses.

Adm Phirasak Watcharamul, Deputy Commander of the RTN, handed over the 16 houses to Prasit Phuchutvanichakul, Chief of Koh Lanta District. Construction, undertaken by some 400 sailors, started in April.

Also present at the handing-over ceremony of the “Rak Lanta Village” housing project was Wanlop Chiaravanont, Executive Director of the Charoen Pokphand Group, which gave 11 million baht to help fund it. Fourteen other sponsors, responsible for gifts of TVs, fridges and bedding, were also present.

K. Prasit told the Gazette that of the 11 people killed on Koh Lanta by the tsunami, nine were locals and two were foreigners.

He said, “The tsunami arrived here 10 minutes after it hit Phuket so we were able to warn people. Also, the waves were somewhat lower than in other areas. The 11 people killed were curious to know why the sea had gone out so far and got caught in the waves.”

He added that 79 local houses were destroyed and about 140 more were damaged by the waves.

“Tourism at the moment is very slow,” he said. “We have 3,200 rooms available in a total of 117 hotels and guest houses, but even if everything were undamaged I believe it would still be quiet.

“I think the main reason that tourists are not coming here is because of the unrest in the Deep South. Everyone realizes that the tsunami was a natural disaster and was not man-made. Owners restored their properties within two months of the disaster but still no one is coming.”

He continued, “Right now we have warning sirens at 10 places on the beaches. In the coming high season, even if we get only 70-80% of our usual occupancy rates, that would be good for us. But I’d like to see the situation in the Deep South improve.”

Tourism is the island’s biggest source of revenue. K. Prasit said that, in a normal year, Koh Lanta plays host to some 200,000 visitors, 99% of them from Europe.

Waard Vilawan, 44, a fisherman who received one of the donated house, tearfully expressed his gratitude to the donors.

“This is the second time that I have received help. The first time I got 15,000 baht from the government and I bought land to open a small shop in the future.

“I’m happy with the house but if possible I would like to receive further aid so that [my wife and I] can set up a small business,” he said.

Phuket to be “C-Commerce’ guinea pig